Of Lunchbuckets, Boxes and Pails 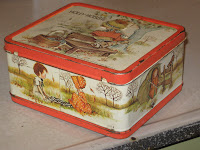 Father told me that back in his day, a lunchpail was literally a pail, a lard bucket, such that when the lid was closed provided a pretty much air-tight container for the sandwiches. But what sandwiches! A lard sandwich, perhaps. (This is no joke.) Or on really good days, a mashed potato sandwich. Taste was less important than energy and a semi-filled tummy, and with ten kids to feed and crop failures as likely as not, you see how this scenario is not so far-fetched.
There are people who collect lunchboxes. There are many sorts and many different manufacturers. Among the most popular collector items are the rectangular stamped steel boxes made by Aladdin for several decades. But to the point. It is not just the type or the manufacturer, but the individual object that makes all the difference.
Recently, a certain Superman lunchbox in mint condition sold at auction for more than $13,000. But this is not to say that the one you have is a mint, so to speak, waiting to be transformed into cash. Not all boxes are equal, not even all Superman boxes.
Perusing several sources of information recently, I determined that many of the desirable models are selling in the $25 to $100 range, with some going as high as six and eight hundred bucks. (Of course you can list your object on eBay and ask whatever you want; but the chances of a taker are slim. And if you let it go for no reserve, you might get $0.99. Or you might do very well indeed.)
My daughter chose back in the sixties a lunchbox which I still have. Rectangular, metal, fair but far from mint condition. And--- wait for it. It still contains the last used napkin and wax paper wrappers from the last lunch it carried! Am I rich? Okay, suspense over. Hers is a "Holly Hobbie," salable on the market for perhaps five dollars, or in other words, probably about what it cost with Thermos. Given inflation, not a great investment. Wait, it's a lunchbox, not a stocks portfolio.
It proudly occupies a space atop the kitchen cabinets along with the few McCoys and a couple of crocks. These old Crocks enjoy them, and that is all that matters. 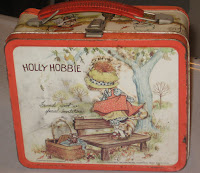 I used a black steel box with a thermos in the lid. The catches were not very secure. I used a piece of welding rod to secure the latches and never dumped my lunch on the ground again.

Holly Hobbie was cute. I had a ROY ROGERS lunch box. Sure wish I knew what happened to it. My dad used one like Chuck describes.

Sharkbytes, I've seen the Roy Rogers box. Very nice. How do people today afford to "go out" to lunch every day at ten bucks or so a pop? Guess they make a lot more bucks than I did.