What Comes around Goes around

or, The Wheels on the Bike Go 'round and 'round. 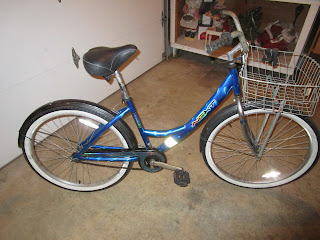 Isn't she a pretty little machine?
The Back Story
I was six years of age. Opal, who boarded in our home for a short time, got a job in a defense plant in Los Angeles.  She departed for her new life but she left her bicycle behind, a huge, to a six-year old boy, heavy, to anyone, steel-framed 26" behemoth.  I wanted to ride a bike.  So by main force-- and awkwardness-- I dragged the vehicle to the patch of grass just beside the neighbor's garden.  I learned to ride, as the saying might go, all by myself.  How many times I picked myself and the machine up from the ground I have no recollection.  But there were incidents.
I have been a bicycle rider for many decades, and past the mid-point of my ninth decade on this orb I can still ride, and I do.  But.  Isn't there always a but?  While I have not found it impossible I have found it difficult to get my leg over the crossbar to mount the bike.  Solution?  Oh, yes.  In the barn there is a functional, nay even easy riding 26" girl's bike, that is, one without the annoying crossbar.  I have been riding it recently but it was flawed.  It had no basket in which to carry my groceries or whatever and it had no fenders to keep the wheels from striping my clothes with mud should the streets be damp.
But my bicycle had all three of these, so I cannibalized it in the interest of perfecting this beautiful lightweight aluminum machine you see here.  The only problem was that the back fender struts bolted to  special holes in the original bicycle but there were no such holes in the frame of the blue bike. and the struts were an inch too short to be attached to the axle.  Hence the project was to extend the struts exactly one inch each and include the 3/8-inch holes to fit over the axle.
A snap, a cinch, or easy-peasy, whichever you prefer.  Except it took me, literally, all afternoon to attach that rear fender.
But I got 'er done!
Posted by vanilla at 11:01 PM 4 comments:

Yes, you will believe this because, though it seems implausible, you know that I am a reliable scribe who would not mislead you.

Imagine you are a man of a certain age.  Your spouse dies.  You expect that her income will no longer come into the coffers.  You are right.  What you didn't count on was that you would be getting bills for increased premiums on insurance policies which are already paid and in effect.

I am not making this up.

Explanation:  "You are now a widower, that is, a single male, which puts you in another risk category, therefore the premium is a bit higher."  ("A bit" is well in excess of a hundred bucks, which may be "a bit" in some budgets.  Maybe.)  Anyway, you reply, "So because my wife died I am now a worse driver?"

"Oh, no, sir, It does not make you a worse driver, but it throws you into another risk category.

I have not been treated with such disrespect and inconsideration since I was a single man under 25, and that may or may not have been a higher risk category.  Go figure.