I finally went to sleep sometime after four o'clock this morning.  Meanwhile my poor brain somewhat addled by the collywobbles that have jumped on me, reflected on earlier life experiences and this tidbit passed through my consciousness.

Awake enough now to think about the memory, I thought to share an item from my teen years.  In 1947 Colorado Springs got its second radio station when KRDO went on air in competition with KVOR.  As a Western Union messenger I had access to both of these facilities as required by my employer and on behalf of the business operations of the radio stations.  KVOR studios were on the top floor of the Exchange National Bank Building on the southwest corner of Tejon and Pikes Peak, one-half block east of the WU office.  KRDO established its studios in the Alta Vista Hotel on Cascade Avenue, a bit more than a block and one-half from the office and to the west and north.

(BBBH tells me I always go on and on with too much information before I get to my story.  She may be right.)

The powers that be at the new radio station thought it an interesting idea to offer live broadcasts of certain major league baseball games.  No, they did not hire reporters to go to remote locations, hooking up by telephone or whatever magical method that would be required to transmit the voice cross-country.  Here's how it worked.  Some city slicker in the venue where the game was being played would transmit a telegram to KRDO.  Jerry, the teletype operator, would tape the message to a telegram blank as it came in, hand it to Dave, the dispatcher, who in turn handed it to me.  I mounted the bicycle, pedaled to the Alta Vista, ran up the stairs and breathlessly handed the game report to the clerk on duty.

Upon finishing his account of the fourth inning, and of course the commercial break, the reporter would take this message, we would hear crowd noises in the background, and "It's the fifth inning, still tied at naught.  Smith takes the mound and Barnes comes up to bat for the Dodgers.  Smith is in the windup; ball one! (Of course we hear appropriate game noises.)  Here's the pitch - -  called strike on the inside corner!  Barnes spits on his hands, takes a new grip on the bat.  He takes a ball, low and inside."  (A certain amount of chatter about Barnes batting record)  "And Smith delivers! Strike two called.  Now Barnes shakes off the catcher's sign.  --  Shakes it off again.  There it is now, Smith is ready to deliver.  Barnes swings and misses!  One out, and Needler is coming to bat"

We hear the crack of the bat as the man goes on with his detailed account of Wolf hitting the second pitch between the second baseman and the right fielder (all have names, of course) fields the ball, throws to second, out, relayed to first, doubled them!  Commercial break and the sixth inning message is already in the hands of the reader.

And each inning is so relayed from the WU office on Pikes Peak Avenue to the studio on Cascade Avenue and the reporter makes up his detailed account of a game he never sees and, I suppose, the listeners imagined that they had been taken to the ballgame!  They were taken, no doubt.

During our conversation Saturday I told Kenny I had found two or three Kodachrome slides crumpled in the bottom of a box.  One was of Ann, which I posted yesterday.  He said, "Do you still have all those slides?'  I told him I did. He said, "We used to have so much fun setting the projector on your bed and showing the pictures on the wall."

I told him that if I could locate the pictures I might share some of them here.  Then this happened. 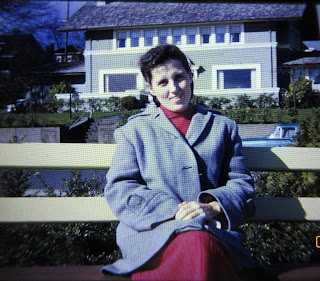 One of my favorite snapshots of Frieda, my children's mother.
On Queen Anne Hill, Seattle, Washington, 1956. 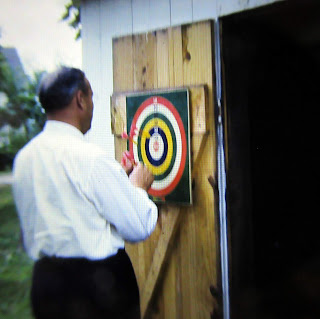 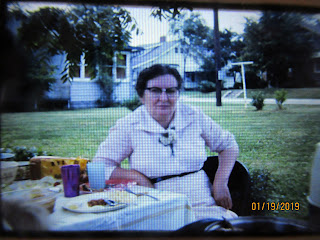 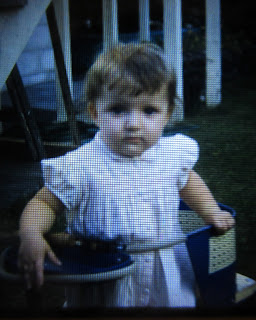 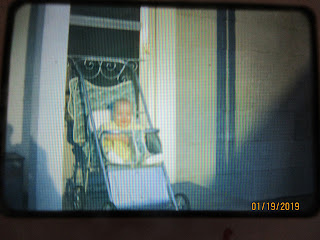 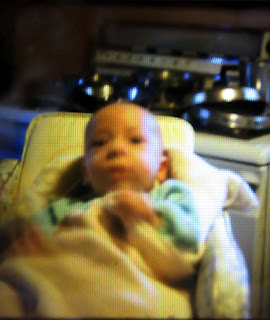 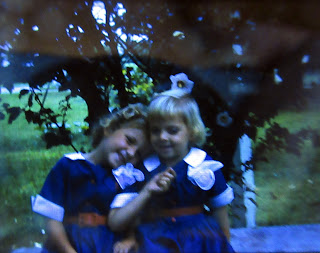 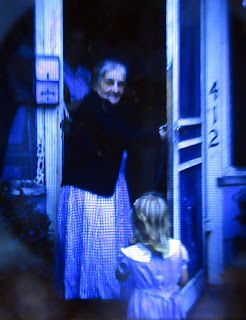 Grandmother Mary Matilda Palmer Morrell.
She was 83 when she visited us in Lebanon. 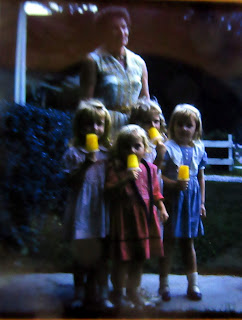 Ann and Ivy with cousins Coleen and Joanne
and their Aunt Mildred Morrell Stone.  Lebanon, 1963. 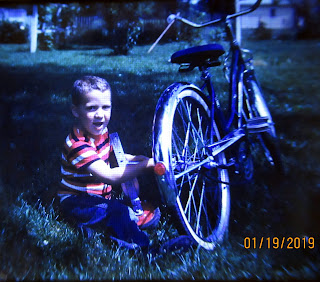 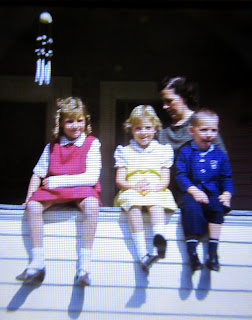 Mom with her three chicks. The fourth still a couple of years in the future. 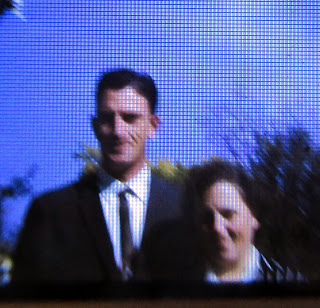 Dad and Mom in Converse. 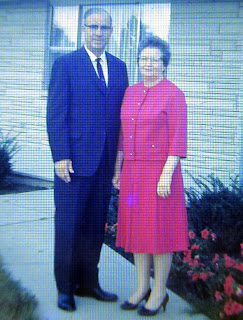 Grandpa and Grandma Lacy at their home on Maish Road,
Frankfort, Indiana  ca. 1972. 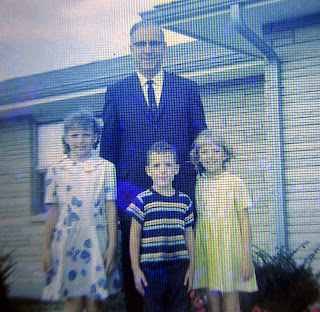 With Grandpa in Frankfort 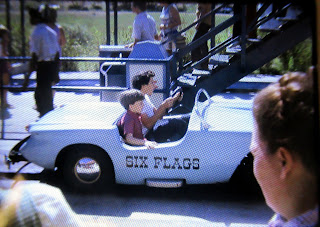 There's Kenny!  His brother is at the wheel. 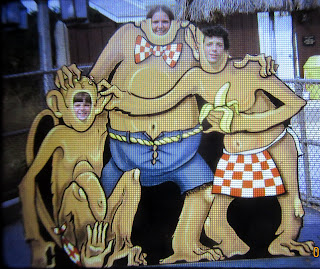 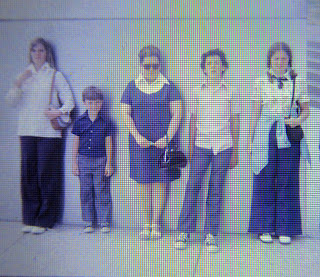 The "lineup" is against the wall of the Gateway Arch ca.1972. 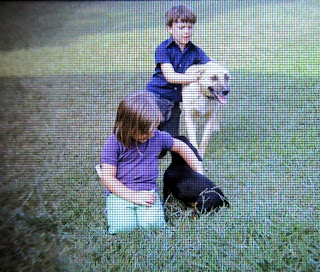 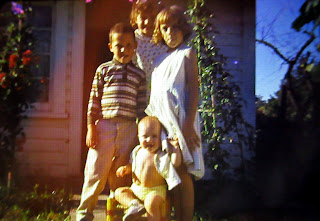 In front of the chicken house in which we lived in Portland, Oregon, 1968.
Kenneth is nine months and walking.
Posted by vanilla at 4:00 AM 5 comments: 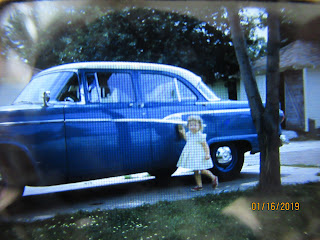 I found a crumpled Kodachrome slide in the bottom of an old box.  Flattened it best I could, laid it on the light screen and took a snapshot.  Here is the result.  My eldest child beside her grandfather's nearly new 1956 Ford.  Muncie, Indiana, clearly a very long time ago.
Posted by vanilla at 4:00 AM 4 comments: 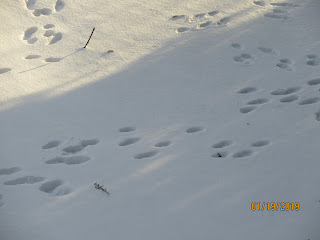 The bunnies have been playing in the front yard and along the sidewalk. 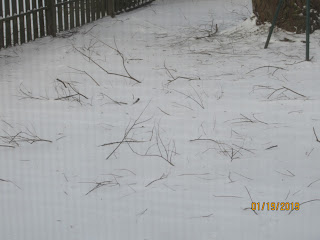 A few of the branches down in the backyard.  Wish someone would pick them up for us. 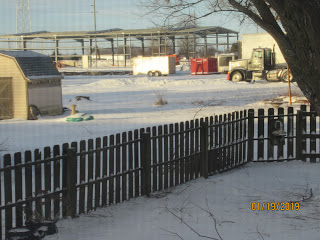 And there is the honking big building that is going up behind us. 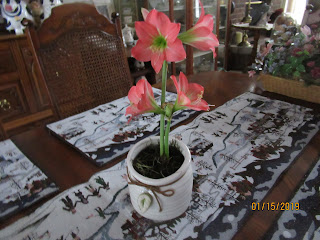 Snow forecast for this weekend.  (Why not? It snowed last weekend.)  But here is a bit of Spring indoors, thanks to Mark and Patty who sent the pretty little pot with a bulb inside.  Set it in sunlight, watered it, and voila!

Whatever the storm outside, maintain your inner tranquility
Posted by vanilla at 4:00 AM 2 comments:

Today is the day to ditch the New Year's resolutions which you made under duress, or from a sense of obligation to yourself or someone else.  Today is the official day to rid yourself of these unnecessary burdens.  Get rid of the resolutions you have already broken. (Yes, I know.  It has been  2-3/7 weeks since the year began.)  Too, you should dump the ones you will break later on.  Do it now and save the aggravation of carrying them any longer.

If you are one of those righteous souls whose efforts toward your avowed goal are intact and you are feeling mighty good about yourself, good for you.  Soldier on.  You are under no obligation to observe this day in the practice, so observe it in the breach.

No one seems to know the origin or the originator of this holiday, but trust me, it is real.

Have you made any resolutions which you are still keeping, and intend to keep?

A Sermon at the Movies #T

Spoiler Alert!  This article discusses certain aspects of the movie "The Mule."  If you haven't seen it and plan to do you might want to bookmark this page for a later date.  You have been warned.

BBBH said, "Let's go to the show tonight.  Clint Eastwood usually plays the good guy, but I guess he is the bad guy in this film, and I would like to see it."

Naturally we braved the elements and took our seats in a crowded theater, bothering the aisle seat people, of course, who left the remaining pair of seats inside.  BBBH muttered "Sorry," as she passed through; I said, "I'm not sorry, but excuse us anyway."

The picture ran its course and the house lights came up.  As we exited the theater we met a couple, our friends, also on their way out.  We greeted each other and stood a few moments in the foyer.  "I didn't like the way the show ended," remarked the gentleman.

"Well, he should have taken the money and sailed off to the Caribbean in his new yacht."

And there it is.  Perspective shaped by the forces that make each of us who he or she is.  In a sense my friend was rooting for the bad guy.  Go figure.  Perhaps his analysis suggested to him that the old man was caught up in a web from which he could not extricate himself.  And that is very likely the case, but still he made the choice to pursue the nefarious activities.  Actions have consequences.

My take on it was this.  The old man elicited our sympathies in many ways, yet he was knowingly engaged in poisoning his fellow-citizens with illicit drugs.  On his last run he was carrying 307 kilos of cocaine and that is not to mention the eleven previous runs.  He deserved punishment.

Yet he got better than he deserved, for in a sense "The Mule" is a story of redemption.  We see the man mending fences he tore down over this lifetime; we see reconciliation with his family, and he is 90 years old.  Of course we want a "happy ending."  And I think we got it.  Earl goes to prison, but even there he lives with the knowledge that his family has readmitted him into their lives.  He continues to pursue his work with his beloved day lilies on the prison grounds.

Earl confessed his sins in open court.  If we confess our sins in the open court of God's judgment God is "faithful and just to forgive us our sins."  Our consciences are clear.  We are redeemed.  But.here is a point that I think many people overlook.  Redemption does not erase the consequences of wrong behaviors.  Actions have consequences.

God forgives and we can  forgive ourselves.  But the price in the natural realm will be paid.
Posted by vanilla at 4:00 AM 6 comments:

To our Nation's Leadership:

While I stay out of the political fray on social media, I can no longer sit by and make no comments on our current situation in your bailiwick.

We elected you to serve our interests, to protect our rights, and to defend our Constitution.  My questions to you are these:  How can you in good conscience look yourselves in the mirror in the morning? How can you face us day after day in pretense of serving our interests above your own?

You are holding the American people hostage to trivial political differences, and I repeat for emphasis, they are trivial.  No matter where we stand on the political spectrum I think it is safe to say that we are all disturbed by the cavalier way in which you manipulate us as though we are mere pawns on some giant cosmic chessboard.

I, for one, and I think I am in the company of millions of others, I am tired, tired to sickness with the unrepresentative cruel way in which you treat us.

Copied directly from post on STSTT ten years ago today.  Thus today would be the 84th anniversary of Mr. Presley's birth. 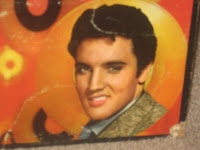 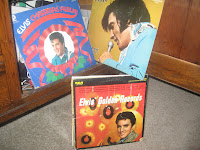 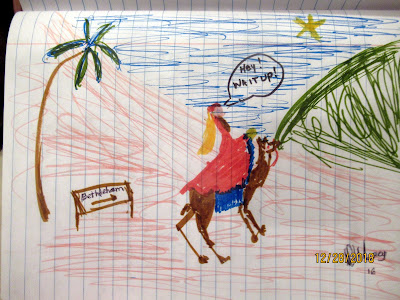 (The star) led them on until it hovered over the place of the child. They could hardly contain themselves: They were in the right place! They had arrived at the right time!

They entered the house and saw the child in the arms of Mary, his mother. Overcome, they knelt and worshiped him. Then they opened their luggage and presented gifts: gold, frankincense, myrrh.