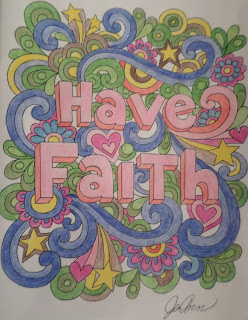 Now faith is the substance of things hoped for, the evidence of things not seen. --Hebrews 11:1
Posted by vanilla at 8:30 AM 9 comments:

Little old woman and little old man
took a thirty-gallon garbage can
into the yard to pick up loose grass
five pounds or so, and another eight
then dragged the bucket through the gate
to the compost site.

They are exhausted.  Nap time.

It really is very annoying to be unable to get anything done without total exhaustion.  How did this happen?
Posted by vanilla at 4:00 AM 6 comments:

Who said we don't have any Spring flowers?
Yard to the west of ours.  Guess from which direction the
prevailing winds come. 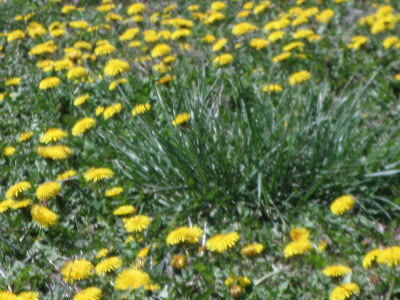 The catalpa holding on to last fall's fruit is putting
forth new leaves! 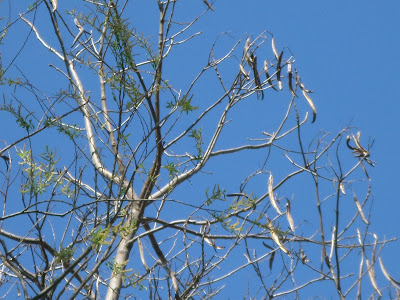 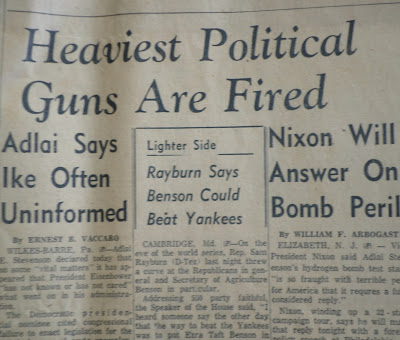 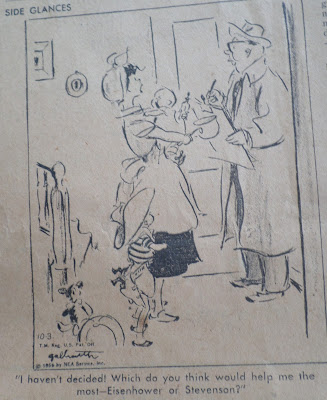 She says to the pollster, "I haven't decided!  Which do you think would help me the most=-Eisenhower or Stevenson?"

Well, which will help ME the most is always the question, isn't it?  plus ça change

Eisenhower was the second campaigner I heard speaking from the rear platform of a train.  Truman the first in Colorado Springs, Ike in Seattle.
Posted by vanilla at 4:00 AM 4 comments:

A few weeks ago we observed the mission efforts of Paul and Barnabas in Lystra and Derbe.  While they continued in ministry together for some time we finally encounter an incident which precipitated their separation

As we observe the rift between Paul and Barnabas (Acts 15) the question of Christian fellowship and differing opinions arise.  We note that the writer, Luke, states that the contention was "sharp," hence we might conclude that it was no small matter.  Barnabas and Paul had worked  side by side in their missionary work for some time.  For a period, John Mark, a young Christian, traveled with them.  But he decided to separate himself from them at Pamphylia.  At a later date we see Barnabas insisting that Mark rejoin them in their efforts, but Paul was not having it.  Presented here is a difference of opinion seemingly based on personal relationships.  Some commentators insist that Barnabas was patient to a fault and wanted to extend a "second chance" to Mark.  Some also tend to think that Paul was too stubborn to afford a second opportunity to the young man.  Some even contend that nepotism may have played a role in the dispute, inasmuch as Barnabas and Mark were related.

Whatever the case may be, we know that Barnabas continued his mission with John Mark as his co-worker.  Paul chose Silas and returned to his ministry.  No one involved pronounced condemnation on anyone involved in the rift.

Can Christians disagree even to the point of "sharp contention"?  Clearly the answer is "Yes."
But the "Yes" applies only to matters of opinion on which Scripture is silent.  On matters of the faith, doctrinal disputation must always be resolved by Scripture.

Many years later, although there is no record of Barnabas and Paul ever meeting again, we see that Paul commends Barnabas to the church and recommends that the church at Colossi receive Mark.  It is also noteworthy that Paul in writing to Timothy directed him to bring Mark to him, as he would be profitable to him in the ministry.  Paul never said he was wrong in the prior incident, but this might be construed as an apology of sorts, or it might be that Paul believed he was right earlier, but Mark had proven his effectiveness in the ministry, thus he would be welcomed back to join in Paul's efforts. (1Timothy 4)
God seems to have allowed the incident to occur so that the work might be expanded in this instance by two mission efforts rather than one.

I grew up in  a church in which this motto was on the masthead of the official church paper:  “In essentials, unity; in non-essentials, liberty; in all things, charity.”

There has been considerable difference of opinion as to attribution of this motto, but it has been tagged as the "peace maker's" maxim.  I have questions about this which I have not completely resolved,  What think you?
Posted by vanilla at 4:00 AM 6 comments: