Following Saturday's activities, Sunday was a day of rest.
Monday noon we had the RV loaded; we were soon on the road. 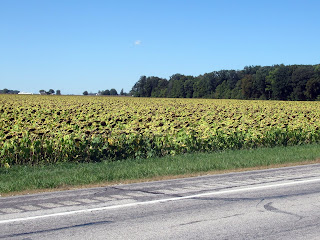 This field of sunflowers about four miles north of Mier on State Road 13. 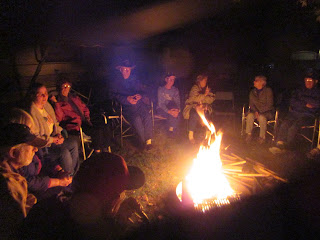 Joined with our friends again at Salamonie Park for the last camp out of the season.  Wonderful Fall weather, even better: fellowship with like-minded and good hearted people.(This does not mean we all agree on everything, but we like each other anyway.) 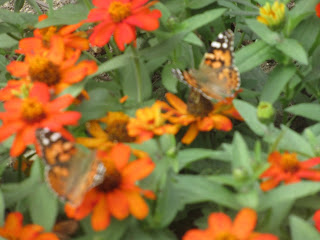 In the park is the Huntington County Master Gardeners plot.  We strolled through as the insects flitted around, then we hit the road. 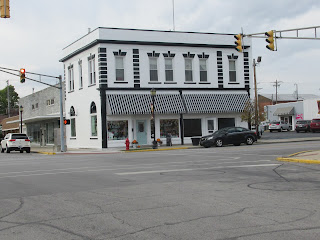 Arrived home in time to pick up the mail (mostly junk) and to note the facelift on the old interurban station.

All adventures end, and yet being home is an adventure in itself. 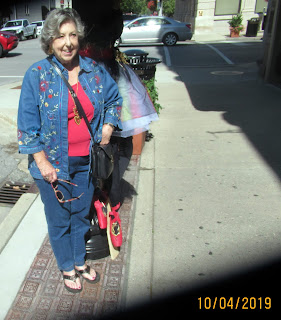 The fun began Friday when Heide and Richard took the Birthday Girl (aka BBBH), and me to Noblesville for lunch. 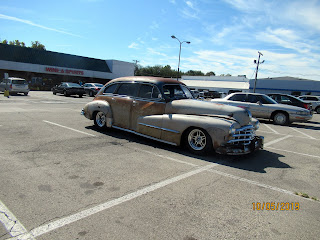 Saturday, The Day, we went to market, she with her list, I with mine.  Guess who got back to the car first.
While I was sitting in the auto waiting for her return this beauty drove into the lot and parked.  1947 Pontiac.

Saturday evening it's off to Frankfort for the wiener roast that she requested for her party. 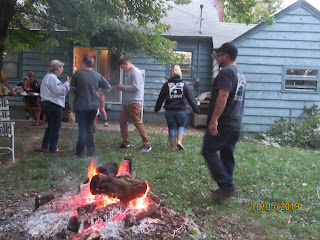 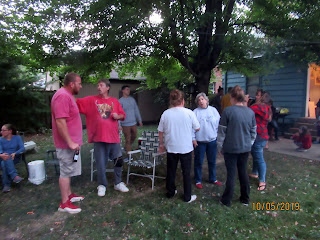 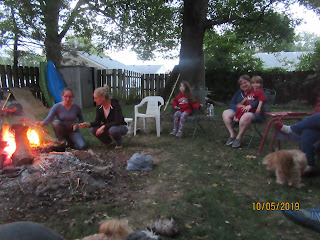 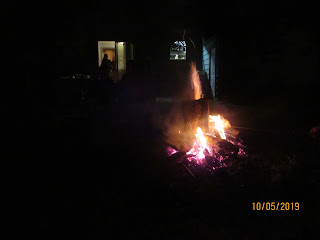 Twenty of her children, grandchildren, and a couple of great grandchildren joined the celebration in Kent's backyard.  Needless to say she was thrilled!

Yesterday was the birthday of
BBBH. Before you chastise me for failure to make mention of the fact consider that I was so busy during that day making the lady happy that I didn't have time to blog.  If you follow her on her Facebook page you know how many birthdays she has had but I won't tell.  Fewer than I have had, suffice it to say. When I asked her earlier how she wanted her birthday celebrated she said she'd like to have a wiener roast with fire pit and all that good stuff. So I gathered a bunch of supplies and her youngest son very kindly invited us to have the party in his backyard because he has a fire pit and a lot of firewood and all that sort of thing so we wandered over to Frankfort and an awfully lot of people showed up which made her very happy and of course in turn made me very happy.

We are resting now. 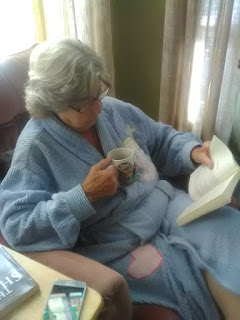 Things I'd Never Heard of

before I moved to Indiana.

6.  Persimmon pudding.  Why didn't I know about this sooner?!

Although I had heard of basketball, I did not know it was a religion until I moved to Indiana.  There are two altars at which the devotees may worship.  Some are converts to the religion if they were born elsewhere, but most are born to the sect they follow.  Failure to worship at one of the shrines can get your Hoosier citizenship revoked.

The "Indy 500"  I had heard of it of course but was not aware that the entire state and all its activities were given over to it for an entire month every year.  It is billed as "The Greatest Spectacle in Racing" and every Hoosier pitches in in the attempt to make it so.

To our immediate south is Louisville, Not Indiana.  There the first Saturday in May is given to the Kentucky Derby which is denoted "The Greatest Two Minutes in Sports."  I could say that thousands of people gathered in one place to show off their sartorial finery and drink mint juleps seems considerably more genteel than thousands of people gathered inside a two-and-one-half mile oval to engage in a day-long beer bash. But to say it could well get my Hoosier citizenship revoked, for sure, and I have kept my nose clean as an Indiana resident for sixty years.  I like it here and don't want to jeopardize my standing.

1The battle rages.  Whose eatery in the State serves "the best" tenderloin?  What condiments may be eaten on it?  Lettuce and tomato?  Mustard and dill pickle? and so on.

3I am not referring to piney woods  I refer to Indiana's state flower: the peony, which is pronounced "piney."  Well, by some people, anyway.
Posted by vanilla at 4:00 AM 6 comments:

I am pruning the crab apple tree.  Note that I did not say "I pruned the tree."  And why would that be?
I started the job Monday, wore myself out and bruised my left forearm a good bit.  I took Tuesday off.  Today I went back at it, lopping and sweating;  I'm exhausted.

I think I have the job at point such that I can finish it tomorrow, if I live that long. 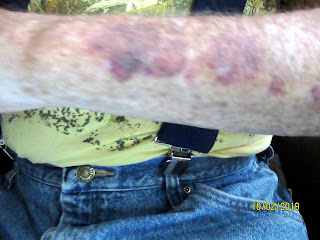 I am now at that stage of life that my daddy told me about, the time when it takes three days to do a three hour job.
Posted by vanilla at 3:59 PM 6 comments: