Driving along Independence Street.  A man/boy, perhaps 17, wearing earbuds in both ears and looking neither to his left nor to his right, stepped off the curb and ambled across the street directly in front of my moving vehicle.  I got stopped, of course? and he strolled on totally oblivious and unaware of my presence, I guess.

I drove on nearly to the end of the block, saw a parking space I wanted and started backing into said space.  A grown man, gray bearded, walked along the sidewalk, stepped directly behind my moving vehicle and cut across the vacant parking spot to get to his vehicle which was behind that space.  I stopped, of course? and waited until he cleared my path then proceeded to park-- close to his truck so he would have to back up to get out, of course!

I was presented with the platinum opportunity to off or seriously maim two of my fellow-human beings in the space of  less than one-half-block.  I didn't.

Happy birthday to my eldest child, Ann Marie,
and to my brother-in-law, Elvin!

In an exciting turn of events, Lin of "Duck and Wheel with String" called with the news that she was in the area, and would a meeting of the Blog Posting Murderers be in order?  Of course!  Lin showed up along with Joe and Emma and a wonderful though too-brief afternoon ensued.

We did not have a quorum for a full-fledged meeting of the group, so we formed an ad hoc committee composed of the two of us and proceeded to reminisce, fill in the blanks, and generally catch up.  Mention was made of course of the other members of the society, all good.

The five of us, the two bloggers, BBBH, Joe, and Emma, poked around the yard a bit, but soon repaired to the house and the AC for the temperature was already in the nineties and coming off a long winter it was a bit much outdoors.

Enjoyed the visit, though we missed you, Sharkey, and you, Chuck. 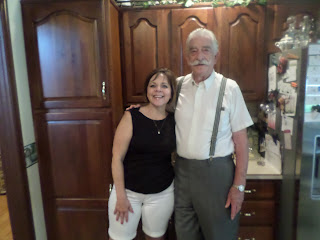 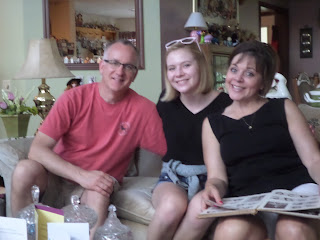 The Price of Leadership

Numbers 11.  Herein we learn of the feeding of the Israelites with manna from the Lord; of the  complaining of some of the riff-raff desiring meat; of the plaints of Moses; of the solution to the meat problem, and other things.

Moses heard the whining and complaining of the people and Moses sensed the anger of the Lord.  Moses:  Why me, Lord?  Are these my children, did I conceive  them; did I give them birth?  What have I done to so displease You that you have laid this noisome burden upon me?  I can't carry these people alone, the burden is too heavy.  Just go ahead and kill me.

Then before resolving the issue of whining for meat, the Lord proposed a solution to Moses's leadership problem by asking him to call  together seventy respected elders to the tabernacle and I will come down, God said, and I will take some of the power of my Spirit which is upon you and place it upon them.  Then he directed Moses to tell the people they would have meat-- meat until  it ran out their nostrils, until they loathed the very sight of it.

The 2018 camping season has started!  Our new year began at Mounds State Park, as is our custom.  Let us simply say that  we enjoyed four absolutely perfect days and three great sleeping nights and arrived safely home with no untoward incidents. 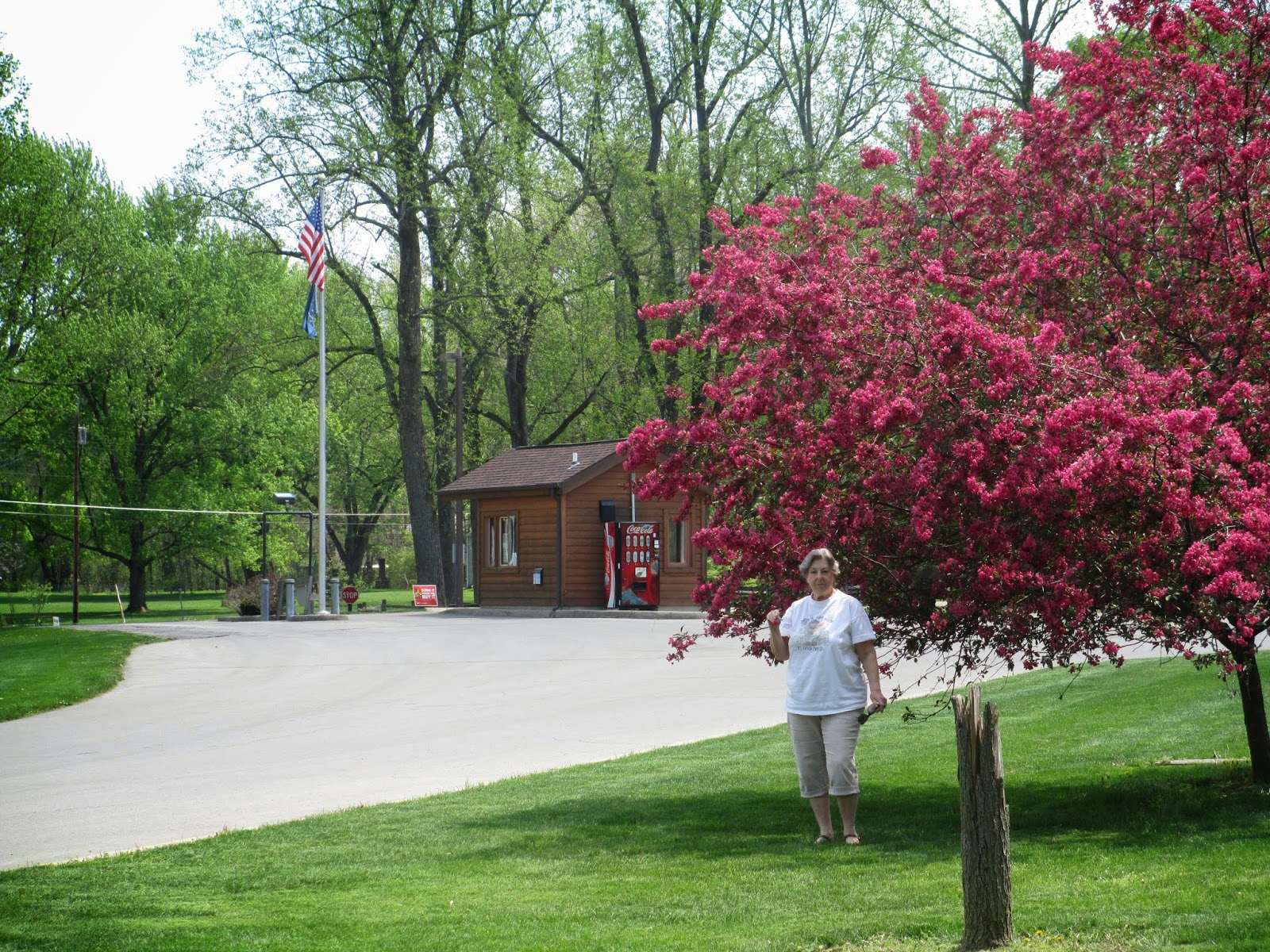 in the decline of American civilization.

1939 commercial  broadcast tv begins in US

or, From Boise, Idaho to the Inner Machinations of World Politics

Which of us  has not been fascinated with tales of intrigue, spy vs. spy, and perhaps have even built a fantasy life in which we were the hero, saving the nation or the universe by dint of clever manipulation of men and ideas?  Okay, boyhood fantasies perhaps.

Will the real James Angleton please stand?  So much has been written about this individual that the man himself virtually disappears, vanishes, his fellow craftsmen might say, and in his place a legend has arisen, a man whose career will never be paralleled!

This is an introduction to a man whose legacy is bigger than life, and who by his own deathbed admission had many regrets, even stating that he would meet his masters in hell.  Angleton served in the CIA under eight Directors from Roscoe Hillenkoelter to William Colby who dismissed him, and under six Presidents from Truman to Ford.  James Jesus Angleton was Director of Counterintelligence from 1954 to 1974.

Angleton has his supporters, accolades showered upon him; he has his detractors, even to those asserting that he himself was the mole for whom he so famously searched.  Much that has been written is fascinating, so much so that movies have been based upon some of these tomes-- Orchids for Mother, Honorable Men, Wilderness of Mirrors, possibly among others.

As he was a life-long chain smoker there is no irony in the fact that on May 11, 1987 the last breath of air escaped the cancer-riddled lungs of James Jesus Angleton.  He was 69 years of age.

Mr. Angleton was truly a man of many parts, an amateur poet, literary deconstructionist, grower of orchids.  His work with the OSS in World War II was the inception of his career in spycraft.  He was one of the founding members of  "The Company" when the CIA was chartered in 1947.

This man is almost always referred to by his full name, James Jesus Angleton, perhaps in part to differentiate him from his well-known father, James Hugh Angleton who was also an OSS operative during the war and the owner of the NCR franchise in Italy,  James J. spent much time in Italy.  After joining the army he became an OSS field agent.  His mother was Carmen Moreno whom James H. met while serving as a US army officer in Mexico.

Curiously it happened that Wednesday this week I was listening to the Senate confirmation hearings for Gina Haspel's appointment as Director of Central Intelligence.  She asserted that the CIA is not in the business of violating human rights or lawbreaking  in general.  Perhaps.  And perhaps, too, it was before her time, but maybe she should read the CIA's own document referencing The Family Jewels.  Abstracts and the document itself are readily available under FOIA.  (By the way, I support Mrs. Haspel for the position.)

"The Family Jewels" cites eighteen "issues of legal concern" from wire-tapping, mail opening, search without warrant, and so on, to the four-year detention of Yuri Nosenko, tantamount to kidnapping, in which Angleton was complicit.

I have long thought Angleton to be a fascinating character, but keep in mind that I am not an expert  on his life nor on the trade he plied.  Study them yourself if you are so inclined.  Whatever you read, take it with a grain of salt, or a tablespoonful, depending upon the source. 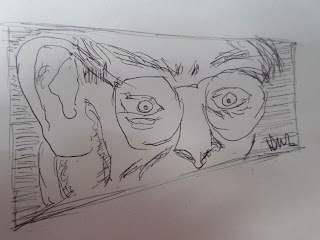 Here is a picture of my weather screen this morning.  Is that fantastic or what?
(Drag left to view the week.)