I sit on the courtesy bench at the end of a bank of checkout lanes while BBBH studies the available stock in the supermarket.

People watching.  Young couple, mid-thirties, conducted transaction at courtesy counter.  He is perhaps 5' 5", 130.  Small man, straight nose, strong jaw, nice looking.  He is wearing a navy blue sweatshirt with Superman logo on front.  She is half-head taller than he, somewhere in the 5' 8", 5' 9" range, 180.  Indeed I am already thinking, "He must be Superman," when they are joined near the front exit by two girls, obviously their daughters.  Both, like their mother, are taller than he.  The younger one is probably eleven, the other about fourteen.

He lives with these three ladies.  Yep.   Superman!


Word of the day:  Superman.  If you think he is just the figment of some imagination, you should meet some of the people I have met!
Posted by vanilla at 4:00 AM 5 comments: 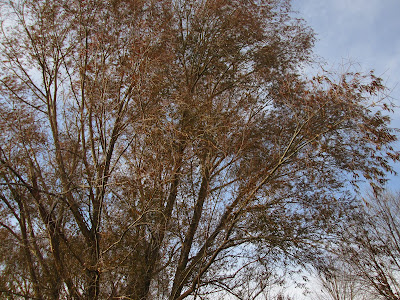 I have raked and carted leaves from the yard twice this fall.  I still have this to deal with.  There are six of these austrees on the property.  You may look through this one and see two more of them behind it in the lower left corner of the picture.

I am tired.  These remaining leaves will probably be lying in the yard come April.  The gutters, though will have to be done again.  And probably again.  Ice dams are no good.  You would not believe how long it takes me to climb up and back down four steps on a ladder.  Nor how many times the ladder has to be moved to get the job done.

Word of the day:  ice dam which every Midwesterner knows and fears.

Thanksgiving in the Bowl Revisited

Did I tell you about the time we had but one bird and thirty-five people for Thanksgiving?  Well, your Aunt Grace decide we gonna be thankful whether we had anythin' or not.  She didn't miss hardly a fambly member, sayin' to 'em all, "We gonna have Thanksgiving over to our place this year.  Jep and me has been blessed, and we'd be disappointed you didn't join us."  Now in the manner of the times, I guess we had been blessed.  We was still alive, and we managed to scrape somethin' together each day to keep our souls connected to the bodies.

It was Dust Bowl days, doncha know, and nobody had much a nothin'.  We was much better off 'n many around us, 'cause we had saved a little coin which I had failed to put in the bank back in '29.  Always was a bit leery them suited guys with they green visors.  So anyway, we weren't total broke, and I gone up to Canon where I was able to get a few things, couple hunnert weight a cracked corn, hunnert pound a cornmeal, pinto beans, enough for the whole town.  So it looked like beans and cornbread for some time to come.  I'ma thinkin' you was maybe three, four years old at the time, 'cause your Mama and Daddy come on down for Thanksgivin'.

Anyways, when I left Canon to come on home, I stopped by Arly's over to Florence and wha'd'ye reckon?  Ol' Arly had hisself half-dozen turkeys he'd been nursin' along.  Scrawny they was, too, eatin' what they could scratch up.  Arly give me one a them birds, insisted I have it, so I tuk hit.  Well, I bring that bird home, and glory be! I have all that cracked corn and two months 'til Thanksgiving.  Well, son, I kept that bird pretty close, pen him up in the ol' tool shed.  Yessir.  Fed him good and give him more water than I tuk myself.  Well, talk about surprises!  When people start gatherin' in our house on that Thursday mornin', the aroma like to knock 'em down, hit smell so great.  Some a the fambly had had little enough, and then some, when it come to meat in Lord only knows when.

Well, your Aunt Grace had kept the winders sheeted over purty good, and the sugar and flour were kept wrapped tightly and inside half-gallon Mason jars.  Couldn't set out a sugar bowl, nor even keep it in a cabinet, 'cause even with a lid on hit, the dust would just natural get inside.  Gritty sugar ain't fit'n to use.  So Grace had been bustlin' around two days gettin' fixed for dinner on Thanksgivin'.  Now she only invited people to come, she never ask them to bring anything, but they all come with they hands full, and those ladies were bringin' the best they had.  Why Marcella Dean, you know Marcella, her'n Larry brought they six kids along, but Marcella make the best "apple" pie you can imagine from nothin' more'n pie crust, sody crackers, and vinegar and sugar.  I don't rightly know how she done it.

Anyway, the feast was on, and Grace would have it no other way but that she would make a little speech afore we et.  And she lay it on.  She said as how times had been bad for a long time, and some folk was gettin' discouraged.  Why the whole Palmer tribe, she says, done lit out for Cally-forny, and if we was all givin' up, wouldn't be nothin' here no more but tumble-down shacks and rattlesnakes.  And wouldn't you know, like right on cue in a stage play or somethin', Fred Baker speaks up and says, "Let the snakes have 'er.  She ain't no good no more no how."

And Grace let him have it.  "That," she says, "is just what I'ma talkin' 'bout.  This is Thanksgivin', and y'all need to be thankful.  Be thankful that we are still a makin' it.  Be thankful that we have loved ones who care about us and would give the shirt off'n they back to he'p ary one of us.  Y'all buckle in, keep the faith, he'p one another and pray, I mean pray like you believe the promises of God, and pray some more, day and night.  We will be okay.  Now Darryl, please to offer thanks to the Good Lord over these vittles, and we'll tuck into 'em!"

So right then and there the prayer meetin' start, but hit warn't so drawed out thet the food get cold!  No sir, we done justice to that spread, let me tell you.  And that bird with the fixin's fed them thirty-five people plum easy.  And the prayin' continue, and behole, the very next Fall the drought breaks and the rains come.  And then, well we are still here, hain't we?

It is time once again to prep the turkey and dressing. I have been advised that this bird is much too scrawny to feed the gang, so I kept him on the premises in an attempt to fatten him up for the next Thanksgiving. Clearly, my efforts have failed.  Again.  (He shows up here on an annual basis, just to tease me, I guess.)

This is one smart old bird. He has figured out that by eating just enough for sustenance and the daily chore of obtaining enough provender against the next day, he has a much better chance of survival.  As, I might add, would we all.

He has so frustrated me that I am tempted to wring his scrawny neck purely as the vengeful treatment he so richly deserves. But I won't; he's become sort of a pet around here.  May I have another slice of that "tofurkey" please?

I wish you enough. Be ye thankful.

Word of the day:  tofurkey, which should never have been coined and for which there should have never been a reason for the coinage.
Posted by vanilla at 4:00 AM 2 comments:

Sticking it to the Upper Crust

In a street challenge I found it quite amusing to blow away a Cadillac.  And many drivers of late forties and early fifties Caddys were surprised to see the rear end of the nondescript little jackrabbit I drove.

Shiny New Gold Emblems and All

1952 was the fiftieth anniversary year for Cadillac and in recognition of that the manufacturer used gold plating on the emblems, particularly the big old "V" that distinguished the marque.  A few other minor changes allowed one to quickly identify the '52 model.  There were a few unseen changes, too.
1n 1952 Cadillac had somehow tweaked the 331 c.i. OHV V-8 to generate 190 h.p.  Even at a curb weight of two and one-half tons, it was now a formidable challenger at a stoplight.  I did not know this until

Uphill, around the curve and away!

The new Caddy was stopped at the 8th Street light on Colorado Avenue.  I pulled beside it in the left lane.  The courtesies were observed and the light changed to green.

Now there was a slight incline and a bit of curve to the right at 8th Street which gave the Cadillac the "inside" lane on the turn.  But that would not have accounted for the difference in the outcome, for I saw the rear end of that beautiful cream-over blue two door hardtop half-block ahead before he reached tenth street.

Lesson learned:  Beware of  GM's finest in its latest mutation.

Word of the day:  marque
Posted by vanilla at 4:00 AM No comments: