went for a ride in a long blue Cadillac

with sunbeams streaming down

I rode behind her and I drove home

did not return with me, the ground received 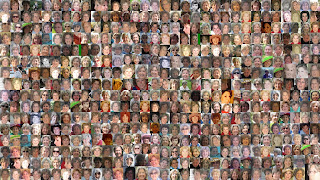 She stood faithfully and firmly by my side for more than twenty years.
Posted by vanilla at 8:10 PM 7 comments:

Cañon City, Colorado, summer 1940 my father in the process of building a church building is sitting on the ground, hammer in hand, a bent nail in the other hand held against a flat stone.  Dad is straightening used nails.  There is a small pile of nails next to him.  He places the straightened nails in a near-gallon lard bucket as he works.

Coming up Seventh Street we see an elderly gentleman, arrayed in full three-piece dress suit, starched collar, cravat, walking briskly to the north.  This is "Busy" Jones.  Mr. Jones acquired the appellation because he is busy.  He is milking virtually every cash cow in the community and though he has amassed a fortune the size of which the town busy-bodies speculate about and wish they knew.  Jones lives with his spouse in a nice but modest abode a few blocks north of the church site.  Jones walks to and from his office daily.

"Nice day, Mr. Jones," replies Father.  Dad drops a nail into the can, picks another from the pile and places it on the stone.  As he pecks at the crookedy nail with his hammer, Mr. Jones reaches into his pocket.  He pulls out a dime, drops it onto the mass of bent nails lying on the ground.

"Here, Preacher," he said, "go buy yourself some nails!"  He turns and heads on toward his domicile. 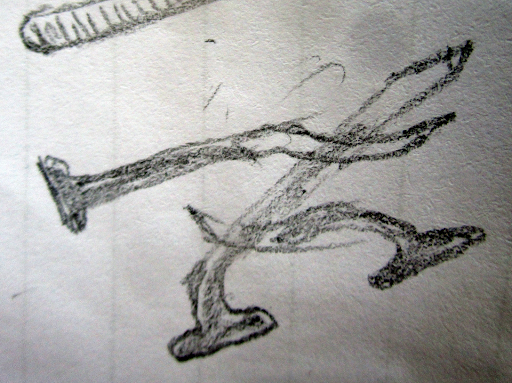 I have speculated about this event over the years and have wondered if perhaps the old tight-wad acted that evening to buy himself a piece of heaven, for he was 74 years old at the time, or if he was just having a piece of fun with a "religious crank."

It was nearly a lifetime later that I grew curious enough about Jones to use the interwebby thingy to see what I could learn about him.  His name, which I had never known, was Lewis Jones.  He was born in 1866 and lived ninety years on this orb.  He built Cañon's theatre, The Skyline, in 1917 but sold it a few years later as he had many other fish to fry.  RIP, Busy.

The words of Amos, who was among the herdmen of Tekoa, which he saw concerning Israel in the days of Uzziah king of Judah, and in the days of Jeroboam the son of Joash king of Israel, two years before the earthquake.  --Amos 1:1 KJV

Some modern scholars refer to the earthquake mentioned here as the "Amos Earthquake."  Geologists, seismologists and archaeologists have verified that this quake occurred in 760 B.C. which would have been during the "days of Jeroboam."

The quake was estimated at 7.6 to 8.0 on the Richter Scale and its epicenter is placed roughly 60 miles north of the Sea of Galilee.  It was the largest temblor along that fault in the past 4000 years.

The Rest of the Story

Sitting here after one ayem. Thinking of an incident that took place when my father was 85 years of age. I took him out to Doctor Fearnow's small orchard to introduce him to the old gentleman. We stood in the driveway next to the stand where the man sold his produce. The two men exchanged some experiences, found that they had some things in common. Dad was a minister, the doctor had been a missionary to Haiti in his younger day, he said.
Inevitably, the pitfalls of growing old came up when Mr. Fearnow observed that things really were more difficult to accomplish, and so on and so forth. Then he said, "You'll know what I mean when you get to be as old as I am."
My father said, "How old are you, Mr. Fearnow?"
"Why," he replied, "I am 77 years old."
With a grin Dad replied, "My, you really have piled up some years."
Never a hint at his own age, and I was standing there about to pop a stitch trying to keep from laughing out loud.

The old apple man never asked, and we never told him. 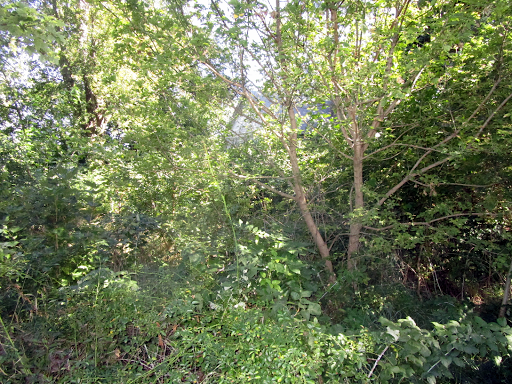 Mr. Fearnow's house now, taken yesterday from the driveway in which we stood to visit. He passed five years ago at age 97.
Posted by vanilla at 1:47 AM No comments:

It's 4:08 p.m.  I am on my third cup of coffee.  What is going on here?  Normally I would be setting up my second pot about now.  Less coffee, good, no?  No.  I am also getting less sleep  Two hours last night, four hours (maybe) the night before.  With less coffee I should be getting more sleep, right?  Not the case.  Worse I fear I may be getting dehydrated for my coffee not only supplies my caffeine, it supplies most of my liquid intake.

You may infer from this that my lifestyle has been disrupted.  It has been.  My close friends and family know this but I have not been journaling about it in a public forum.  A mention might be in order in the event that I post something completely irrational.  Oh, but that happens often, you say?  Knock it off.

Her daughter and I are providing round-the-clock care for BBBH with the assistance of Guardian Angels Hospice whose personnel visit from time to time.  They are very pleasant and caring people but of course can provide only the services for which they are equipped and JoLynn and I are with her at all times.

Sleep is a prized commodity for us all and seemingly rationed sparingly by whatever Fates control such things.  Morpheus?  Whatever.

Coffee intake is limited only by the desire to procure a cup and swallow the contents.  The urge seems to strike much less often than it did in the past. 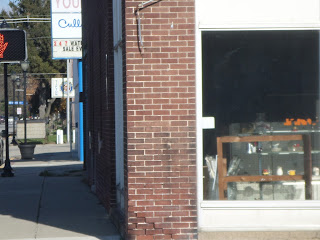 Walking along the sidewalk minding my own business; looked up and what should I see but 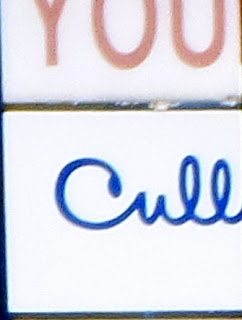 this.  I reject that.  I have been called many things, some of them not complimentary, but I refuse to accept that I am a "cull."

I have made the same trek untold numbers of times but this was the first time the sign shouted this at me.  Now what have I done to deserve this?
Posted by vanilla at 9:37 PM 1 comment:

Two years ago BBBH and I visited my sister and her husband in Kansas.  They have since moved to Idaho.  Too much detail, I know, but I miss being able to jump in the car and see them at the end of a day's drive.  Proceeding with accounting for the pictures.  While we were there Vee said to me, "I found some old negatives and would really like to know what is on them."  Hey, what are big brothers for?  I told her I thought I could "develop" them digitally, and lo, for once I was able to deliver. 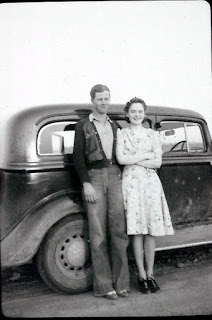 This is a photo of our good friends, Win and Esther Brown.  As children we developed a close bond with these people.  Esther stayed in our home briefly long ago.  Winfred, in later life known as Win, as in the army and served a tour of duty in the European Theater.  He survived battle encounters and ultimately returned to the States, was honorably discharged and came to our city to pursue a degree in the Bible College of which our Dad was President.  Win and Esther went into the ministry and served as pastors of three or four churches on the district.  Later Win was elected District Superintendent.  We maintained contact with these people over the years.  Esther passed on to her eternal reward in 2002 and Win joined her in 2013.  He lived alone the years following Esther's passing. He repaired clocks (finally having to turn down business because too many people wanted his services) and worked in a funeral home as a driver and assistant in services. 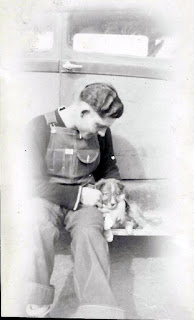 This is Win as a lad with his dog.  This would probably have been six or seven years before we met him. 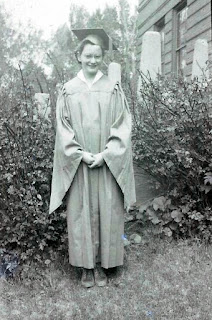 This is Esther's high school graduation   Win and Esther were both natives of Morland, Kansas and her memorial is in Morland Cemetery along with that of Winfred who passed later.
There were other pictures in the pack of negatives but I have made these three snapshots an opportunity to pay tribute to two kind and loving friends.

Proud of Who I Am

BBBH and I truly enjoy Merle Haggard's songs and his performance of them.  He did a number that goes, "I'd like to hold my head up, be proud of who I am.  But they won't let my secret go untold.  I paid the debt I owed 'em but they're still not satisfied.  Now I'm a branded man, out in the cold."  And so on and so forth.  I sing along with him betimes (through the miracle of technology, though he is no longer with us).  Possibly inappropriately, for I've never spent a day in jail in my life.  I sang his song "Tonight the Bottle Let Me Down" as a public performance one time.  Back home that evening BBBH chastised me.  "You can't do drinking songs.  You've never had a drink in your life."  Well, okay then, but call it empathy or whatever.  I like the song."  I sketched this as a tribute to Merle's plight 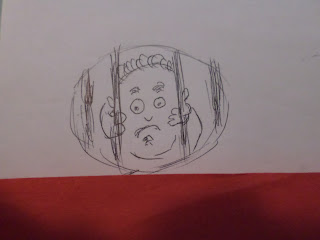 Clif, Church and the Unknown

I did a series about the Pratts of Pineville two years ago.  This has lain dormant in my drafts folder.  My intention was either to continue the series or to conclude it in some reasonable way.  I never got around to proofing and completing this, so it seems we may now infer that the Pratt story ends here at the kitchen table.
A few days after Darren had visited Clifton's chicken ranch, twenty chickens and a goose, Darren invited Clifton over to his house for a Saturday romp around.  Clif said, "I ain't never been to no preacher's house."

"You probably have never been to a church, either."

Saturday morning, a bright day, promising cheer, warmth, and good times.  Clifton showed up at the Pratt's back door just as Mrs. Pratt stepped out to drop a trash bag in the bin.  "Hi, there!  You are Clifton, aren't you?"

"All right, then, Clif.  Get on in here.  Hotcakes and bacon on the table!"

"Oh, Miz Pratt, I never thought to you feedin' me."

"Of course we are going to feed you."

Darren was all excited that Clifton was going to spend the day with him.  Darlene was not so pleased, but she resolved to behave herself, at least for a while.  "Hey, Weasel," she greeted the visitor.  "This little twerp is my sister, Mindy.  You have met Mom, and Dad will be here soon's he finish shaving.  Sit down."

The four kids seated themselves at the table.  Mrs. Pratt poured six glasses of orange juice and seated herself just as Edwin entered the kitchen.  "Morning, All!"  His cheery, booming pulpit voice so early in the day.  The kids all muttered a "Morning," and Dad seated himself.

As the Pratt family all linked hands around the table.  Clif was a bit puzzled as Darren reached for his right hand while Mrs. Pratt was taking hold of his left.  But he caught on quickly and joined in as they all bowed their heads and Edwin greeted the Lord in thanksgiving.

Clif could hardly believe the huge stack of pancakes on the platter, but they were all quickly transferred to the six plates around the table.  Another batch was cooking on the griddle as they buttered the first batch!  Oh, my!

Collect enough I can wallpaper my bedroom.
Posted by vanilla at 12:29 PM 2 comments: