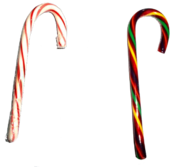 This Christmas season, my daughter-in-law and I have been exchanging nostalgic recollections from our childhood years, one generation between hers and mine.


Dear Patty,
You asked about my childhood memories of Christmas. I am going to give that a shot. Some of my recollections are not so much different from some of yours. The first story is not a recollection, but rather a tale I heard my Dad tell so many times it became mine as well. The year I turned three, we lived in Nebraska and there was no such thing as money in our household, except as Dad told it, the sole nickel he had in his pocket. Wanting desperately to buy me a present, he shopped the small town over and found there was nothing to be had within his means. But. On Christmas Eve before the stores closed, he took one last walk into the village, and behold there was a sign in the drugstore window which said "all toys and Christmas items, 1/2 price." And there was a stuffed lamb in the window with a ten cent price tag on it. He bought it with his last nickel, and presumably a happy Christmas was had by all.

So my first memories of Christmas took place in Canon City, Colorado where we lived from the time I turned five until just before my tenth birthday. A couple of things that were much looked forward to and relished with gusto were oranges which Uncle in California sent, and Brazil nuts. Along with the nuts, we always had "Christmas candy" which consisted of peppermint candy canes and real honest-to-goodness "ribbon candy," imitations of which can still be had, but it's not the real thing. Too, I particularly like the "red raspberries" which was a hard red candy with a gooey center.

I remember Dad building the stand for the tree, and Dad was a good workman. His results always insured that the tree would remain upright and perpendicular to the floor. (Whereas, in later years when I attempted to duplicate this feat, things didn't always work out so well.) The decoration of the tree, as I recall, included a few actual "store bought" globes which probably increased in number over time, in spite of the loss of a few of them each year due to careless child-fingers. The principal decorations were paper chains which my sister and I made, using paper from the Big Chief tablet, colored red and green with crayons. (Purchasing construction paper was not an option.) The paste of course was made in the kitchen with flour and water. And popcorn strings, the construction of which permitted me to use my little needle and a spool of mom's Clark and Clark white thread. I don't remember an angel on top of the tree. Yet, unfortunately I do recall later in life hearing the story of how the angel came to be on top of the tree; and there are some things that oughtn't to be a part of Christmas.

Mom was a fantastic cook, and that isn't just nostalgia at work. She really was. Her mincemeat pies-- and I'm talking mincemeat, not a mess of cooked up dried fruit like you get these days-- were, as we say, to die for. I do remember the year we had a Christmas goose. Memory mostly focuses on the greasy quality of the bird.

We always got presents, but for the most part they were very limited in number, probably an item of clothing and one toy. One year, I lusted mightily for a "woodburning set." I wanted it more than I wanted breath. And, miracle of all miracles, that is what I got!

I remember the year that we discovered a truly sneaky technique for determining what we were "going to get." As Dad had to always "look his best," we had a little bottle of Energine handy. This was a volatile and probably now forbidden cleaning fluid, which had a mohair applicator with which a mustard or grease spot could easily be removed from one's clothing. Or whatever. So, the discovery was that if one rubbed this stuff on the wrapping paper, the paper became transparent and one could read the printing on the box! When dry (really quickly, too) no evidence of the nefarious deed remained. Fantastic.

Of course, there was always the preparation for participation in the Christmas pageant at church, not necessarily an exciting part of the story, but a necessary part.

By the time I was in fifth grade we had moved to Colorado Springs, and no longer did we have to rely on the Saturday night bath in the galvanized tub in the middle of the kitchen floor. We actually had a tub with plumbing and drain and everything. So anyway, Cheyenne Mountain High School each year presented a program called "The Littlest Wise Man." and it was an annual treat to attend a performance. (Can you even imagine a public school offering a "Christmas" program these days? Heck, they don't even allow you to say "Christmas.")

Okay, you asked for it, but how do I get this stopped? I literally could go on. And on...

The thing about nostalgia is that we tend to keep and perhaps embellish the good times and discard or gloss over the bad. I love it.

I too remember those Saturday night baths in a galvanized tub on the kitchen floor.

The energine story is great! My dad always bought a box of the ribbon candy (YUM), and I have a picture of li'l ol' me in one of those galvanized tubs!

Ah nolstagia.. any form of that is almost always amusing and makes you feel warm inside.

SR and Sharkebytes: Thanks for your visit and the comments. I guess there were a lot of galvanized tubs around back in the day!

Silver, your comment appeared as I was writing this! Yes, our memories permit us to "enjoy" the past without having to relive it.