BBBH and I took a three-day two night excursion to Southern Illinois.  We drove across some 250 miles of prime Indiana-Illinois farmland.  We saw a handful of fields that have been prepped, zero that have been planted and this two weeks past the target day.  Pray for some dry weather for Midwest farmers. 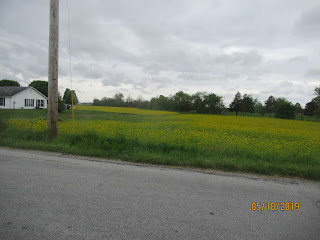 We checked into our hotel in Mt. Vernon and thus our adventure began.  We contacted the spouse's 94 year old brother and he and his son met us for dinner in a nearby restaurant after which we all repaired to the hotel lobby and shot the breeze until this scribe was exhausted.  Good memories, debatable memories and so forth. 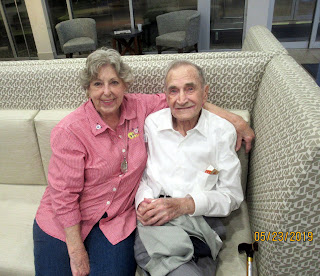 The following day BBBH and I cruised her "stomping grounds" (her words) while she detailed the
ancient days in which she grew up.  We located the corner where her parents lived at the time she was born but were not sure we had identified the house, though the brother asserts that it is still there. (We did not drag him out of bed to guide us on the tour.) 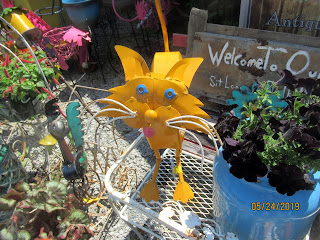 Ugliest cat I ever saw.  This at BBBH's favorite junk shop.
She always buys something when we stop there.

Anyway.  Met again in the lobby the second evening and the breeze having been shot the previous day, we shot the bull.  My words.  They assert that their memories are true and accurate.  Perhaps.

Now on Friday morning we were advised that the entire city was under a boil order/conserve advisory due to a major water leak somewhere.  They finally found it We were advised that there might be 14 to sixteen hours water left in the towers.  Boil and conserve.  Well, the hotel provided bottled water for the few guests who had already arranged for a Friday night stay and started turning people away as they arrived.  When we went out for dinner that evening we found most restaurants closed so we wound up with chicken salad and a loaf of bread from Kroger.

By Saturday morning the leak had been repaired and samples had been sent to the lab but the boil order remained in effect because they did not expect test results back until Monday morning.  We packed up and got out of Dodge.  Or Mt. Vernon or whatever.  Adventure.
Posted by vanilla at 10:15 PM 2 comments:

Is this blog dead?  Well you might ask, for I seem to post infrequently.  I ran this site on a near-daily basis for about nine years, slowed down a good bit in the tenth and now it looks as though it is coasting to a stop.

A few years ago I wrote a piece on blogs that lie dormant.  The questions I addressed were

1. Why does this blog lie dormant?

2. Why did this person try blogging in the first place?

3.  Did this blogger cave to some other social medium?

I have written several drafts from time to time saying "goodbye" to the blogosphere.  Never posted any of them.  Now I find that though I don't use the space much I don't really want to abandon it permanently.

So, Dear Readers, I have appreciated your support, and should the "juices" start flowing again (you may think "sap rising") something new might appear here.

Five years ago I related the account of our visit with Bessie Hart on the occasion of her 95th birthday.  Today we attended a party in celebration of her 100th birthday.  She is still alert in recall and conversation and a joy to visit. 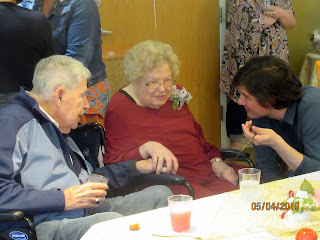 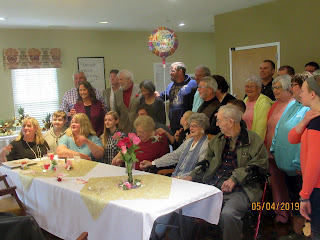 This is part of her family who were in attendance (I didn't get quite everyone in this shot).  The lady to Bessie's left is her 97-year old sister Elizabeth who walked around and "worked the room."  The white haired gentleman in the jacket and red turtle neck is her son, Les, who practiced medicine here in Tipton for several years.