Puzzling in these Puzzling Times

Okay then.  We were back at it during our "incarceration." 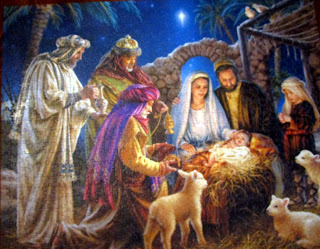 A Christmas puzzle in April?  Certainly.  The story of the Saviour's birth is good anytime, and it is more likely that Jesus was born in April than that his birth was in December.

Difficulty rating:  very high; challenging, but not beyond our skill level!
Posted by vanilla at 7:43 PM 2 comments:

Herschel was the seventh son of the seventh son.  From an early age Herschel heard people remarking on this fact.  It puzzled him. Big deal, he thought.  I get the hand me downs from the handed down.  But then he thought, But I have enough, and I have parents who love me and six brothers to complete my life.  I am blessed.

Herschel completed his career and retired, dandled his grandchildren on his knee and watched them grow to adulthood.  Though fame and great riches never attached themselves to this man, he was happy  Then the realization that he was mortal crept in as the aging process and the diseases of old age began to take a grip on him.  People said, Oh, Herschel, you will live forever.  You are the seventh son of the seventh son.  But Herschel knew he would not live forever, and that became more distinctly clear as the months passed by.  So Herschel decided to write his own obituary.  He sealed it and placed it with his important papers and gave directions to his wife and his children as to how to find it and expressed his wish that it be used in place of the boilerplate the funeral homes tend to write.

His wishes were honored, and without the particulars, we here present the final paragraph of what this man wrote.


HERE LIE THE EARTHLY REMAINS OF AN ORDINARY MAN.

Herschel possessed the magical power of contentment, and in that Herschel was an extraordinary man.