I am making this an annual event.  That is how much I like it.  Hope you like it.

Today is Halloween.  It has become quite a big deal, commercially, that is.  Why, I would guess that the dollar turnover on decorations and partying is as big as Christmas.  Yet I don't think of Halloween as a holiday.  A day for fun and mischief, perhaps, but even the mischief has gotten carried away from fun into wickedness.

Here is the reason:  Wishing you a fun and safe good time on Halloween.  And, 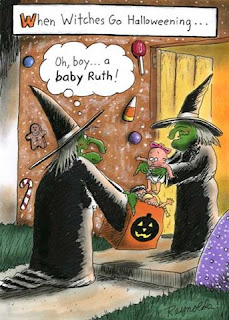 inflicting on you once again my all-time favorite Halloween cartoon.  You are welcome.
Posted by vanilla at 4:00 AM 4 comments:

Now Jotham the sole surviving half-brother of Abimelech stood on Mt Gerazim and preached this to the citizens of Shechem:


Once upon a time the trees set out to anoint a king over them.  They said to the olive tree, "Be our King!"  Don't be silly, replied the olive tree.  Should I give up being a useful producer to rule over you?"

Then the trees implored the fig tree to  become their king.  "That is ridiculous," said the fig tree.  I am useful for sweet, lovely fruit.  Who would want such a  useless position?"

So they turned to the vine and the vine, too, rejected the offer, for it would rather produce grapes for the wine.  Finally they asked the thorn bush  to rule over them.  Perhaps because it wasn't doing anything useful anyway it acceded to their plea, and so the trees anointed a king!1


"Now," continued Jotham, "this is what is going to happen: fire from the bush will consume the trees and the fire will also consume the bush.  You have treated the family of Zerubbaal thus. This son of his bondswoman has killed all our other brothers.  If you think this is righteous, take joy in his rule and let him take pleasure in you.  If not, however, let fire come out of Abimelech and consume you, Shechem, and let Abimelech be consumed as well!"

Three years into his reign the people of Shechem rebelled against Abimelech, he set siege to the city, a thousand of its principal inhabitants took refuge in the Tower of Shechem2 which the king burned killing all within, but as he was igniting the thing a woman in the tower dropped a millstone on Abimelech's head.  He ordered his armor bearer to thrust him through with a sword that it might not be said, "He was killed by a woman."

Posted by vanilla at 4:00 AM No comments:

Joash the Abiezrite had a son whom he named Gideon "Destroyer" or he who bruises and breaks.  I think of him as The Hammer.  The Midianites were a scourge to the people, destroying their crops and means of livelihood.  The Lord revealed to Gideon that the people had strayed from His ways and their worship of Baal was the reason for their suffering.  Gideon tore down his father's altar to Baal, cut down the grove, built an altar to Yahweh and sacrificed thereon.

Upon discovering the destruction of the grove and the altar of Baal the people were wroth and demanded Gideon's life.  But Joash said, "What? If Baal is god, then let him fight his own battles."  So he gave his son a new name, Zerubbaal "He Against Whom Baal Contends."

Now Gideon was led to drive the Midianites back.  More than thirty thousand men showed up to engage the enemy.  The Lord told Gideon "No.  Take fewer men lest the people think they have prevailed and forget that it is I who give you the victory over the enemy."

Now we recall the Sunday School story about Gideon that we learned in our childhood in which Gideon tests God with the meat and the fleece, how Gideon finally selected 300 warriors to back him up.  The curious picture of the volunteers drinking from the stream, the selection of those who dipped the water in their hands and lapped it like a dog and so on. (Judges 7:5-7)  Seven decades after the SS lessons it occurred to me that there lies within this vignette a parable of alertness and preparedness.  Can we be ready to serve if our faces are immersed in the stream of worldly affairs?  Can we detect the enemy closing in upon us without sight? 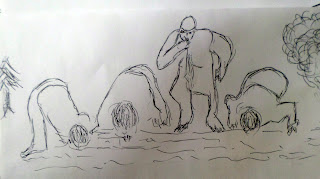 God, true to his word as he always is, gave Zerubbaal and  his 300 men victory over the Midianites.Then the people asked this man to be their king.  "No," he said, "neither I nor my son shall rule over you, for Yahweh is King!

The story continues into territory beyond the Sunday school lesson in which we discover that Gideon lived to a ripe old age and had seventy sons "for he had many wives." But he also had a concubine in Shechem on whom he fathered Abimelech.

Sadly Gideon was hardly cold in the grave before the people of Israel again turned away from the true God and built altars to Baal, forgetting all the good into which Gideon and led them.

Abimelech aspired to rule the people, convinced his mother's people to support him in the endeavor to gain control, hired a bunch of lowlifes to assist him and killed 70 of his half-brothers.  The people crowned Abimelech, declaring him to be king.  Then Jotham, Zerubbaal's sole surviving son stood on Mount Gerazim and shouted the parable of the trees and the vine, then ran for his life.  (Chapter 9)

I Can't Have It

Yesterday I told BBBH I wanted a hog oiler as decor in our front yard.


I'm hurt.  I had this wonderful idea.  Setting a hog oiler beside the sidewalk leading to our front door with a nice concrete, or fiberglass, Poland China rubbing up against it would be a fantastic representation of the economic contribution of our bailiwick.  Not going to happen, but imagine it with me.  Wouldn't it be great!
Posted by vanilla at 9:35 AM 9 comments: