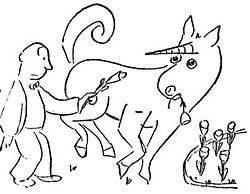 James Thurber, American writer and cartoonist, was born December 8, 1894. My first encounter with Thurber was in a high school English class where we were assigned his very famous story, "The Secret Life of Walter Mitty," a selection in the anthology we were using that year.

For many years thereafter I made it a point to read some Thurber selections from time to time. I enjoyed his drawings almost as much as I did his short stories.
Thurber's work appeared in "New Yorker" magazine for many years and there exist numerous volumes of his collected works.

Inasmuch as James Thurber was a significant force in the literature of the twentieth century, there is much information available about him should you choose to accept the assignment of learning more about his life. As for instance, how he was blinded in one eye; how that may have affected his creative abilities; why his degree from Ohio State was awarded posthumously.
pocketa-pocketa
Use this link to read "The Unicorn in the Garden." http://english.glendale.cc.ca.us/unicorn1.html

I am an absolute fan of Thurber. He could be uproariously funny and yet deeply poignant at the same time, and in a few words. Have you seen the play A Thurbur Carnival?