Branch With No Twigs

December 26, 1811. Richmond, Virginia is excited about the post-Christmas performance at the Richmond Theater. The players are performing "The Father, or Family Feud", which will be followed by a pantomime entitled "Raymond and Agness, or the Bleeding Nun." The house is packed, more than seven hundred souls in attendance.

The play ends. The audience, in high spirits, takes an intermission, then all file back into the theater for the pantomime. The first act concludes, sets are arranged backstage and the curtain opens on the second act. Presently, as the lights are being hoist aloft, someone on stage screams, "The house is on fire!" Madness ensues, pandemonium as the attendees seek to escape the building. In less than ten minutes, the entire edifice is engulfed in flames, and seventy-two people have perished. Many others have received grievous wounds in the fire.

On the site of the theater, Monumental Church was erected in recognition and memory of those who were lost. With loving attention and restoration, the church, which entombs those who died, still stands. There is a memorial on which the seventy-two names are inscribed.

Among those who were lost were the governor of Virginia, George Smith, and the founder and president of the Bank of Virginia, one Abraham Bedford Venable, former congressman and senator of the United States. 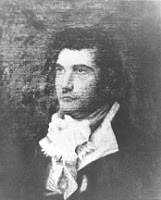 Venable's grandfather was my sixth greatgrandfather. Venable himself never married and had no offspring, but his death was mourned by a host of relatives and friends, including former President Jefferson.
Posted by vanilla at 4:04 AM

Thanks, Andrea. Christ's people hold one another up in prayer.