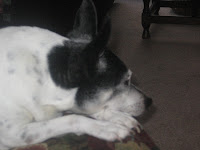 This is Cookie. We are celebrating his seventeenth birthday today. The old boy is doing quite well. He has a few benign tumors, has lost a few teeth. He has some scars, badges of honor from his attempt to protect his mistress from a charging German shepherd. Nearly lost his butt over that one, in fact. He has also been rolled across the street by a car, guess the focus on the rabbit he was chasing clouded his wits. As usual. He can still give a rabbit a good run; and he still cannot catch it. He will dispatch such, though, that are stupid enough to get trapped inside the fence. Ditto ground squirrels. He has never caught a cat, but he has been chased by one. Only time I ever saw such a thing. Cookie was yelping, too, due to the claw scratch across the muzzle.

This dog is definitely a member of the family with all the perks that appertain thereto. If you enter our home wearing black or navy blue, be advised that you will leave with little white hairs attached to your attire. Notwithstanding the brushing, he shoots the little things around like a porcupine shooting quills. (Yes, I know they don't really do that, but you get the picture.)
Cookie's full name is Cookson the Third; and he's "Cookie" because "Tirdie" is totally inappropriate. Yes, it is.
He is a rat terrier and we are often asked if he's a Jack Russell (most folks don't know that that breed is now officially "Parson Russell"). The perkier ears and the somewhat longer legs distinguish him from the other breed, but otherwise they do look a lot alike. Cookie's eyebrows and cheeks used to be red but have now gone white. He has white eyelashes and a lot of white in the black on his head and muzzle. That is to say, he is showing his age.
I got the dog when I married BBBH, whose critter he is. When she first introduced me to him, I said, "Oh, you have a dogette." I had harbored goldens and large mutts for many years. But our little dog has as much spirit as any canine. He's a pet.
Posted by vanilla at 6:00 AM