Climbing Fool's Hill; and Coming Back Down #T 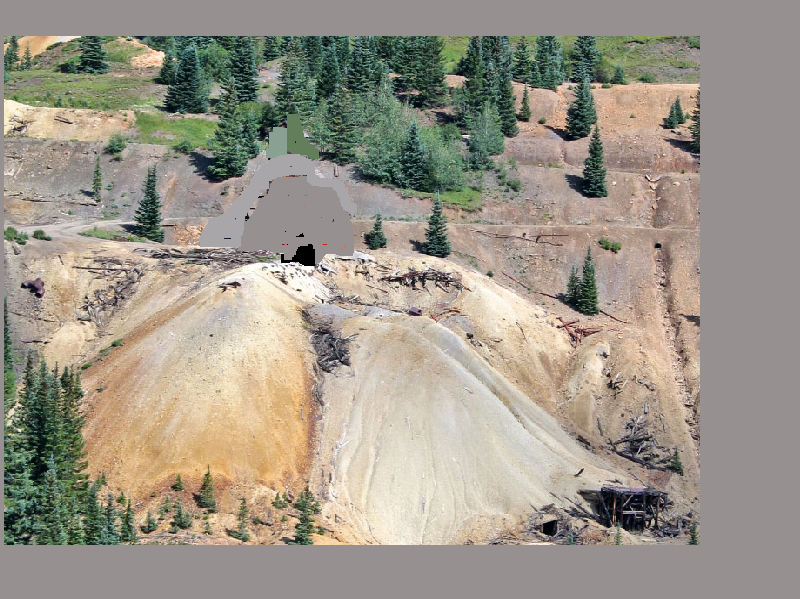 Springtime had arrived on the Front Range.  I think it was a high school freshman class picnic.  Surely it must have been my freshman year, for no one older than fourteen would have behaved in a manner silly enough to generate this tale.

The class was not a large class, for the school itself was a small school.  Close enough:  there were more than ten of us, fewer than twenty, as we set out in four cars driven by the class sponsors and a couple of courageous upper-school youngsters.

A few miles above the Garden of the Gods on the Rampart Range Road, there was a very nice spot for a picnic.  Large meadow allowing for games, plenty of places to explore.  While others were engaged in games of a social nature, three of us wandered up the hill to the site of an old abandoned mine.  We climbed the hill of rubble, moving two steps forward and a step back as the material gave beneath our feet. (Disclaimer:  the hill was not nearly so massive as the one depicted above, but it was adequate.)  Having gained the summit, it seemed imperative to enter the adit and explore the interior of the mine.  However, inside the mouth a few steps, broken timbers and fallen rock were sufficient to convey the message that entry was not warranted.

As I stepped out onto the unstable pile of small rocks, my weight and the forward motion combined to create a skiing action.  Wow!  That was fun.  Climb back up the hill, repeat.  Climb back up, wait.  If I make a short run (there was space for no more than a short run) I can fly!  The landing will be safe, for the itty bitty rocks will cushion me, and I may skid a  l o n g way down the hill!

This all worked exactly as I had pictured it in my mind, up to and including the feet-first landing.  But my feet had no more than made contact than so did my behind.  And I skied a way down the hill.  On my backside.  The rest hardly needs telling, but I know you want my version of the outcome.  Outcome.  What an appropriate term, for when I managed to stand, my hands rather reflexively reached toward the most offended part of my anatomy.  They discovered that there no longer existed a material seat in my breeches.  And that my behind was quite bloody.

Needless, I am sure, to say that the "picnic" was over for me.  But not for my classmates, who went on having fun, while I sat alone, to the side, on an old blanket a sponsor had in the trunk of his car.  Hurt, too.  My pride I mean.  What did you think I meant?

The illustration was borrowed from among dozens I found online and tampered with considerably to reflect sort of what I saw on that sunny May afternoon.
Posted by vanilla at 4:00 AM

I enjoyed climbing in those mountains, but I'm sure your climb was much more exciting than any of mine.

What a story! And how perfect that those of us over some age or other were allowed to learn from out own stupidity.

Thus wisdom is attained. For wisdom grow out of experience. Experienced is gained by doing silly things. (I always had to learn from my own mistakes. It wouldn't to watch others and learn from theirs.)

Vee, today, a climb for me at that elevation would consist of parking the car, getting out to stretch, and climbing back in (the car).

Grace, yes, I believe it is; and I fear too many youngsters today are "missing out" on it.

Chuck, if we all learned from the mistakes of others, the wheel would need be invented only once.