To Decorate, and When; or Not 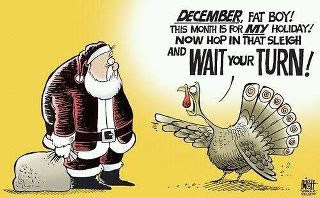 He won't be squawking about this, or anything else, after the twenty-third.

When should the Christmas decor go up? There are about as many opinions on this as there are households that celebrate Christmas. My sister commented the other day to the effect that too early and too long were both wrong. A niece commented that they were putting up their trees and decor as they removed the Halloween stuff. Also, she indicated that her Hubs required it to stay up until the end of February. Yes, I see that, what with the veritable fortune they have invested in the decorations.

I rather leaned, at least while my kids were still at home, to putting up the tree on Christmas Eve and removing it on January sixth. I am leaning now, strongly leaning now, toward no decoration at all, save possibly one eighteen-inch tree on a table in the entryway.

We'll see how that goes over with the Missus.

What is your tradition in this regard, or your preference if you don't follow a specific routine?

Collateral Reading
Yesterday I read an article by Marybeth Hicks which is well-worth the time, probably three minutes, it takes to read it. I have posted it over on Retrotechnocracy.
In this article, Ms. Hicks deals with five things she believes mothers should have taught their children who are now involved in the OWS fiasco.

Good luck with the "no decorating" idea! My bet is that it won't fly.

Sometime after Thanksgiving the 12-inch ceramic tree goes up on a table. A few other items decorate the walls. They remain in place through January 6 (Three-Kings Day).

Vee, much to my surprise, and to yours, I suspect, she likes the idea!

Chuck, seems to me that you have the right idea!

Om has two holiday seasons: Fourth of July and Christmas. The Fourth lasts from July 4 to July 4. Everything else is Christmas.