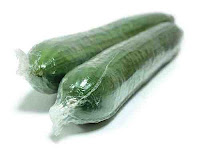 Package the Earth and its parent company, Wrap It All Up, are investing large sums of money to build seniors' assisted living facilities nationwide.  Spokesperson Ewell B. Tapt said today that Wrap It All Up is in a unique position to provide an increasingly necessary service to America's elderly citizens.  He declined further comment when asked about the information this news source  has uncovered.

In a recent meeting of the board of directors of Package the Earth it was revealed that a double-line graph shows a pleasing increase in the inability of people to access their purchases.  Line A shows a steady incline in the toughness and inaccessibility of the packaging, while Line B shows a steep decline in the physical and mental abilities of the customers as they undergo the aging process.   The point X at which the lines cross was the determining factor in the decision of PtE to go into the elder housing business.

Our sources who insist on anonymity revealed that the company policy is to tighten up even further the packaging of everything that is sold.  "We have reached the point where even spuds are wrapped individually!  What a world!" enthused  Frank "Rap" Teight, director of company R & D.  "Soon it will be impossible for people as young as 48 to survive apart from assisted living communities.  Scissors? Knives? Can openers? Pshaw!  We will have them all defeated in five years.  Assisted living communities are the wave of the future, and we aim to dominate the market."

Further, it is rumored that Wrap It All Up is actively attempting a hostile takeover of Waste Systems, Inc.  "Our ultimate goal is to take control of DisposeAll as well," said Teight, according to our source.  "We will have them coming and going!"

Labels: fun; nonsense, satire, you too can make this stuff up

I have a problem with this story. It is so sinister that I'm convinced it has to be true.

Chuck, be afraid; be very afraid. Then read the labels at the bottom of the story. Then write your own news!

You're being satirically serious here but I do shake my head at the individually wrapped potatoes that are marked as 'microwavable' and are more expensive than the potatoes loose in the bin just below. As I watched someone choose those potatoes over the loose ones, I pointed out that the less expensive, loose potatoes were just as microwavable as the expensive individually wrapped potatoes and was met with a blank stare. Ah, young people these days, and middle-aged ones as well. Tho I suppose middle-aged people can be considered young from my standpoint...

I've had a few fights with wrappings that have left me wondering why I don't swear. Now I know that making my life tougher is a conspiracy. : )

Grace, there is a vein of seriousness running through the satire. Packaging is one of my pet peeves. Oh, the blank stares of the young-- really? Do you want to go there?

Vee, "making -- life tougher is a conspiracy" may not be far off the mark. And, yes, I have on occasion wished for a more colorful vocabulary.

Packaging drives me nuts. It's mostly SO useless and wasteful. Masterfully written, sir.

Sharkey, too right. It used to be the waste that irked me. Now it is that plus the inaccessibility of the products. Grrr.