Again, nostalgia, memories, boyhood. The "map" drawn from memory is the neighborhood into which we moved the summer I turned ten. We lived in the house marked "16" second house west of Bristol School where I enrolled that fall as a fifth grader. Out the back door, down the alley, over the wall, and there I was, in prison. I have written about some of my experiences at Bristol here and here.

One year after this move, we moved one block north to the residence marked "17." It was about the same time that the Buttram family bought the store on the corner. They were from Chicago, and thus a whole other kind of people from any I had previously known. Nice people, you understand, just from a different land. They had a girl about my age, and a boy a year or so younger. This was the store where a dime would buy an RC cola and a bag of Planter's naked, salted peanuts, which, after a couple of swigs on the bottle, one poured into the RC. Nom-nom. Of course, you drank it in the store, else you needed two cents for bottle deposit. Incidentally, a good stroll through the neighborhood and a bit beyond would often yield enough bottles (five) to purchase the pop and peanuts.

While we were doing kid stuff in the environs, Dad was engaged as the president of the school marked "1" on the map. It was during his tenure that the huge old house labelled "7" was moved a block down the hill and relocated next to the house we occupied for two years. We finally moved to house number 15 where we lived until Dad left the position.

The next episode will take us to the immediate vicinity of the cowshed and chicken coop (12) directly below the irrigation canal.

(So that you don't have to toggle back and forth, I plan to reproduce this map occasionally for easy reference. 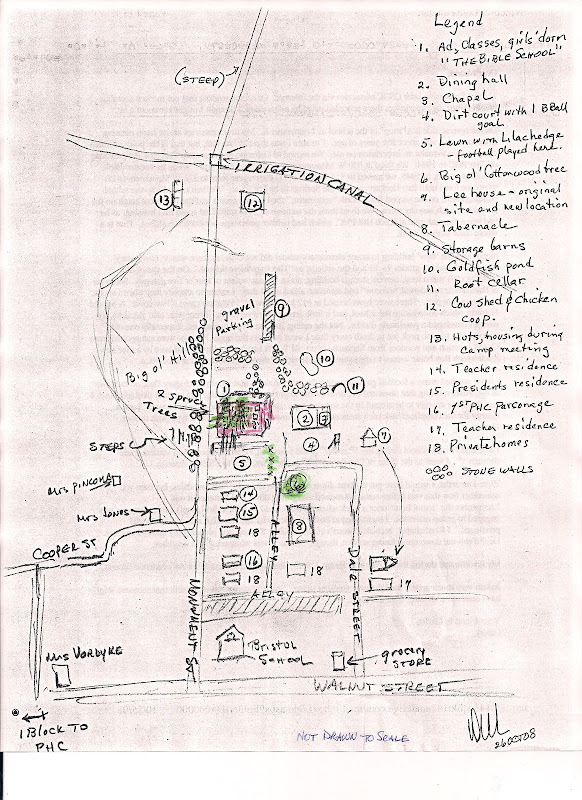 Labels: nostalgia, tales to be told

The hand mower you used to mow the many lawns does not appear on the map. Oh, that's probably not something one includes on a map.

I remember that Bristol School loomed much larger. Such a small structure could not possibly have housed my second grade teacher, Ms. R.

Vee, please note that the disclaimer "Map not drawn to scale" is included.

Yeah, and it had Miss Gardiner, too.