As we study the Advent stories in the first two chapters of Luke and in the second chapter of Matthew we note that joy permeates the account.  Mary visited her cousin Elisabeth to tell her of her pregnancy by the Holy Spirit.  Elisabeth related that as soon as she heard Mary’s voice, the babe within her womb leaped for joy!
Upon the birth of Jesus in Bethlehem, the angels announced to the shepherds that they were bringing good tidings of great joy!  The wise men from the east followed the star.  When it stood over the place where Jesus was, they rejoiced with exceeding great joy!
How we desire to be filled with joy and peace!  Yet how often it seems we are unable to receive the blessing.  I was prepping the motor home for our excursion into a quiet place.  One of the many tasks is the filling of the water tank.
I placed the hose in the filler pipe and had it running at a good volume. It takes several minutes to complete the fill. I stepped around the rig to tend to another item.  Presently I heard water splashing on the ground.  I went to the hose and found the tank was not taking the water, but allowing it to spill to the earth.  I removed the hose and the tank burped.  I replaced the hose, and in a matter of a few seconds it overflowed again.  Removed hose, tank burped.  I knew the vent tube was plugged but could not imagine why.  I tried again, same result.  After the fifth burp, when I reinserted the hose, a brilliant metallic-blue mud dauber crawled out of the vent tube!  Aha!  She had plugged the pipe.

I set the nozzle to fine-stream, top power and shot the water down the vent tube.  The pipe cleared and the filling process proceeded in a normal fashion. 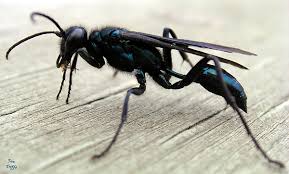 As I completed this task, I was thinking that in spite of our desire for the joy and peace that the filling of the Holy Spirit brings it is too often the case that our inner being, our tank, in a manner of speaking, is filled with air, trivial and meaningless matters, that must be vented to allow room for the infilling of the Spirit.  Yet we have somehow allowed the wasps of worldly cares to plug the vent.  We hold onto what must be expelled, and thus fail to receive the joy and peace that should be ours.
How to correct the problem?  Our faith in Jesus is the jet-stream that will clear the vent-tube of the soul so that we can receive the joy of the Lord!

Sharkey, thank you. Sometimes interesting things do happen to me. (I d.id not know this at the time I had the experience, but at least two aircraft have been brought down by mud daubers.)

A beautiful parable. I have heard of aircraft going down thanks to mud daubers.

Chuck, perhaps it is the case that without malice the mud dauber is simply being a mud dauber-- it is her nature. Apparently also in the nature of humankind to forget on occasion to put the protective plugs in the vent pipes. (There is the claim, though, that in one instance the plane had been on the tarmac for a mere two hours. Somehow seems to me to be too little time for the insect to perform its deed, but again, what do I know?)

wow- I knew I wasn't crazy about wasps, but bringing down planes should get them on the terrorist watch list.

Sharkey, there lurk many perils, many of which we are unaware.

So true that I allow many things to keep out the joy that that is store for me this season - people and stuff.

Vee, it is all to easy to be filled with the inconsequential, and yet never be satisfied.