Project going on down at the corner-- the erection of humongous tall poles for power lines.  These rascals are probably 30 inches in diameter at the base and the crew buries them eight feet deep in the earth.  You should see the augur that digs the holes!

I came out of the house Wednesday morning to go to the pharmacy.  I was a prisoner on my own property.  The street was blocked 50 feet to the north of my driveway and it was blocked 50 yards to the south!   With all sorts of equipment in the intersection to the south it was clear that my only hope was to run the barricade to the north an use the alternate bridge a quarter-mile to the north.  Removing a couple of traffic cones gave me a pathway wide enough for the car and there we go! 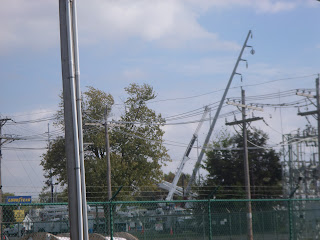 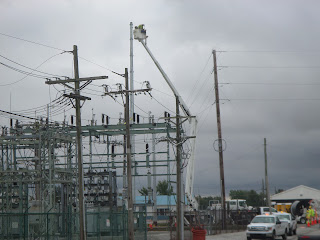 The top picture shows a crane lifting a pole into a vertical position.  The second shot shows a lineman working at the top of a seated pole.  The pulleys that carry the lines are yay big around, quite impressive.  The crews have seated about ten of these and I've no idea how many yet to go.

Snapshots taken from street in front of house.  The project was interrupted  about ten days while the crews were in Florida assisting in the restoration of power following Irma's devastation.
Posted by vanilla at 8:19 PM

That should keep life interesting for a while.

Chuck, hereabouts we take our entertainment where we can find it.

Not sure, but suspect we'll get to help pay for them.

Twenty five years ago had to respond to an electrocution in which two linemen died. I have a healthy respect for electricity and for those who risk their lives so that we all can enjoy it.

Well, that is exciting...until you you have to get by....

Lin, a little inconvenience for a lot of future conveniences, I think.

And... they're baaaack. You are receiving a blog award today at http://myqualityday.blogspot.com/2017/10/an-award-and-goal.html