I was working at the back of the platform in the sanctuary.  Seems the term "stage" would be more applicable since the transformation of the entire space four years ago.  Piano, organ, pulpit, lectern, altar rails all removed.  Pews removed and replaced with cushioned chairs and so on.  But on with the story.

I had my bottle of window cleaner and a soft towel quietly contemplating the elements of worship as I cleaned the enclosure surrounding the drum set.  Pity the percussion instruments are not completely surrounded with sound-proof glass, but again I digress.  The area at the back of the room brightened as someone opened the front door.  I looked in that direction.  A woman clad in a yellow knee-length dress with full skirt and a red bolero-style sweater stepped in and glanced around.  It was evident that she did not see me as she went directly to the "missions" box that sat on a table to the left of the  door. 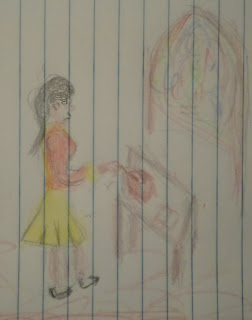 The woman picked up the box, glanced around the sanctuary again, then she set the box down.  The lid was fastened with a hasp, but there was no lock so she simply opened the lid and reached inside.  I could see that she had several bills in her hand as she open the purse that was slung from her left shoulder.  But she dropped the money back into the box, removed the purse from her shoulder and set it on the table.  I took a step toward the front of the platform and she quickly looked up and toward  me but she seemed not to see me.  This small, thin, brightly clad being then took the offering box in both hands and dumped its contents into her purse.

By this time I was near the steps at the front of the stage and as she was zipping her tote I said, in my best stentorian manner, "Bless you, my child!"

Startled?  I thought she would surely break for the door but she was so startled that she was frozen in place.  As she looked at me her eyes and her mouth were as though they were three gaping caverns.  Her face was so thin that the rest of it seemed to disappear,

When I was ten feet from her I stopped.  Black hair, black eyes, olive complexion.  As she closed her mouth I could see the creases  in her forehead and the age lines around her mouth.  She wore  white sneakers, not the spike heels of someone out on the town.  This was not a young person.  I've no idea of the burdens of life that may have caused the creases and wrinkles and I normally do not try to guess ages by appearances, but I am guessing that the person I was confronting was late fifties, perhaps even early sixties.

"No!  Listen to me."  She looked at me.  "Listen.  Take the money home and count it carefully.  Write down the amount on a piece of paper."

"That is hard.  I keep four nietos.   Grandchildren.  You understand?"

Glancing quickly at the wall opposite then meeting my eyes she said, "Carmel.  Carmelita."  On the wall was a banner which proclaimed "WELCOME TO MT. CARMEL COMMUNITY CHURCH."

"Listen. Carmelita.  Write down the amount.  Next time you are in the neighborhood drop that paper into the box, okay?  I will make up the amount in the missions box. Go."

Purse strap over her shoulder, she turned to go.  "Gracias,  Señor."

That's the end of that, I thought.

Two weeks later on impulse I looked into the offering box.  There was a folded scrap of paper.  On the inside was written in pencil "2642$."

I surely hope there is supposed to be a decimal point between the six and the four.

The next Sunday just before the drummer tapped the rhythm for the first number on the rim, the sanctuary door opened and a certain small, sixtyish lady, clad in red and yellow, walked in, followed by four children ages probably five to twelve.

*This* is the faith. Well done.

Jim, the sower plants the seed, but the Lord gives the harvest.

Chuck, thanks. The mission begins where you are.

Vee, thank you. I enjoyed creating it.