Speeding Is the Least of My Infractions

Several years ago, I think about six years, I could look it up if it mattered,  it doesn't, we were traveling cross country in our G6 GT.  We had spent the night in
Kearney, Nebraska and in the morning we forsook the interstate and took US 34 westbound. 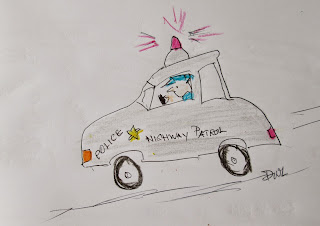 We were cruising along quite nicely and were probably thirty miles east of Benkelman when I spotted a grey car moving toward me in the eastbound lane.  I knew perhaps instinctively more than from visual evidence that it was a state trooper.  I glanced at the speedometer which read "76." Though I removed my foot from the accelerator pedal, I knew when he passed me that he was going to turn around.  He did.  I stopped at the flash of the red light.

"That sounds about right."

BBBH speaks up from the passenger seat.  "We had been traveling on the interstate for a long time." Trying to be helpful, don't you know.

"Ma'am," replied the officer, "You have been off the interstate for quite some time."  He spoke truth.

The stalwart and faithful public servant wrote the ticket, handed it to me for my signature, told me he was giving me a "break" by noting "70" on the ticket which would reduce my fine, and advised me that I could either stop at the courthouse in Benkelman and pay the fine or I could mail it in.

We drove on to Benkelman and found a convenient parking spot on the courthouse square.  I went to the second floor where the sort of business I had was conducted.  The very nice lady cheerfully relieved me of $119.  Then she said, "About thirty miles out on 34?"

What? Cuts no slack for the locals?

I was later advised by a Nebraska resident that fines for speeding on the highway go to the public education fund in Nebraska.  Oh, goody.  That makes me feel so much better.  Maybe some kid will learn to distinguish "65" from "76."
Posted by vanilla at 4:00 AM

There is a marvelous speed trap here, in a residential neighborhood, just as you enter into the county - down a steep hill, up a steep hill - patrol car planted right there at the top of the hill - speed limit 35mph - takes more than that to get up the hill...county coffers filled.

Grace, oh, that is good. Clever, clever people. In my situation terrain flat as a board, saw him coming from clear over there and still got caught.

Buggar. Well, if it is any consolation...he was waiting for you. Or somebody else to come along. It was just a matter of time. Well...and money.

Lin, gotta keep the coffers filled. I like to think, though, that they only ticket real violators, that they do not operate on a "quota" system.

Dad always called the state troopers "Junior." I don't know why, and he never referred to local police officers as such.

"Watch it! Junior will be parked just around this next curve."

The only speeding ticket I ever got came along with a shaming about how someone in my profession should set a better example. I explained that i was running late for an appointment, and the nice officer gave me the option of attending safety classes instead of paying the huge fine. I'm sure it gave him some satisfaction, knowing that my classmates would be from the local high school where I was teaching.

Fines are definitely keeping up with inflation.

The schools do need some source of funding since they come last in the minds of residents who vote concerning taxes.

Vee, that one was exactly half the most recent one I paid.

Some issues should not be subject to a plebiscite. On the other hand, looking at the elected officials the people put in office makes one wonder about that, too.

I suffered the humiliation, and for that I was rewarded by having the ticket removed from my record.

Hehe. Last time I got snagged was about 3 miles after a section of freeway dumps into a two lane. They just lie in wait. (thankfully, a number of years ago now)

Sharkey, aha! You are back in the digital world. Looking forward to the adventure.