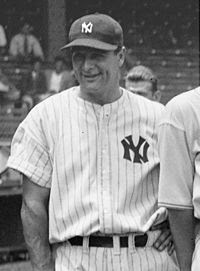 Henry Louis Gehrig was born on June 19, 1902. On June 2, 1925, Yankee manager Miller Huggins put Gehrig in the lineup as first baseman. This was the first game of a record-setting run for the young ballplayer. He played in 2130 consecutive games. He was the first major league player to hit four homeruns in a single game, June 3, 1932. He holds the record for the most career grand slams.


Image: Wikipedia
Posted by vanilla at 3:59 AM

Wow--I didn't realize he played that many consecutive games! I guess he loved the sport, eh?

Lin, Gehrig had a great run, and died much too young.