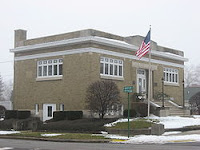 This was the highpoint of life in Loonville. The Carnegie Library was built tall, literally, I believe, to tower over the smallness of the town. One ascended to the heights via a most impressive exterior stairway; but the rewards to be garnered therein were certainly worth the climb.

Since one had to make his or her own entertainment in this village, the library was a godsend to those who could read. No, don't talk to me about videotapes, music CDs and other such johnny-come-drive-the-books-off-the-shelves that have afflicted modern "libraries." Oh, yeah. And computer rooms and electronic card catalogs and how many other ways have we lost something once precious?

In addition to the books and magazines, this little haven of intellectual challenge had a collection of newspapers. No, not microfiche or microfilm or digitized data. It had local newspapers going back to 1868. This little place-too-small-to-make-a-dot-on-the-map actually had a newspaper in the nineteenth century. No more, of course, even at the time this tale reflects.

It was in this town and partly with the help of this collection that I developed a sense of the meaning of "roots." I had been raised in a minister's home, and we had moved eight times by the time I left home and had lived in five different towns. Imagine the sense of wonder that crept slowly into my awareness when I would talk with an individual in the local drugstore or at the post office, then read that person's name in a newspaper from 1879 a few days later. Not just the family name, either, but the whole name just as it is carried by my acquaintance today.
I would read, for instance "Jim Griggs transported eight head of hog to the railhead Saturday." And now in the middle of the next century, Jim Griggs is proprietor of the biggest hog operation in the southern half of the county. "Marcus Wright traveled to Muncie this past week for the funeral of his brother, Frederick Wright, late of that community." Marcus Wright is the fifth grade teacher in the local elementary school today.

I could cite many other examples, but this will serve to help you understand how I came to an appreciation of people's "rootedness", how those who are attached to the land develop a sense of belonging and right of possession. It is small wonder that newcomers to rural communities and small towns are viewed with suspicion and have such difficulty establishing themselves, having to prove themselves on a daily basis.

Rootedness has its good points and its bad. I like the sense of history with a place, but the "ownership" part is sort of annoying when you are new to the place.

Yes, Lin, and I have been the "newcomer" to four different communities in Indiana over the past fifty years. Have been here in Perfect for forty years. Accepted, but still not native; i.e., I can't show any "roots".