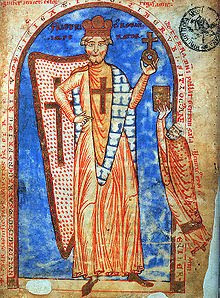 Frederick was leading his forces, participating in the Third Crusade, when they camped at the Saleph River as they approached Antioch. Frederick went to the river to bathe, was swept away by the current and drowned.

According to legend, Frederick is not dead, but sleeps in a cave in Thuringia, or perhaps in Bavaria. When the ravens cease to fly around the mountain, he will awaken and restore Germany to its ancient glory. As he waits these many years, his magnificent red beard has grown through the table where he sits. Though he is in a state of sleep, from time to time he raises his hand to signal a boy to take a look-see to determine if the ravens yet fly.

Another legend, more earthy and probably not suitable for publication in this family journal, has to do with the revenge that Barbarrosa exacted upon the citizens of Milan who had insulted his wife, the Empress Beatrice. It is said that his revenge required an unpleasant task followed by the announcement, "Ecco la fica."*

*A seven-volume dictionary of slang and colloquial English: Abridged by Farmer and Henley, p. 158, on-line version.
Image: Wikipedia
Posted by vanilla at 4:01 AM

That was a very unpleasant task. You might be interest--when I used Google to search for "ecco la fica," this blog post was on the first page of results. How's that for quick?

Chuck-- Google is pretty amazing.
(So was Barbarrosa!)