It was perhaps the year I was nine though more likely when I was eight. I am thinking eight because that was the year I was in grade three, the year I had the tonsillectomy, the year I missed nearly as many days of school as I attended; the year the teacher had no name.  Okay, she had a name, I suppose, but I cannot remember it.  I may have erased her the day she smacked the back of my hand with the ruler, which is about the only thing I remember about her.

This account is written in the first person whereas in most of my school tales I have identified myself as "The Boy."  This is not a school tale as such.  This particular year as the Christmas wish book arrived from Monkey Wards I began to dream my Christmas dreams.  And I wanted one thing under the tree this year.  This item was so precious, so dear in cost, that I knew to dream of more things besides would place me squarely in the realm of fantasy.  I wanted This. One. Thing.

I had never used such a thing.  So far as I know I had never even seen such a thing but Montgomery Ward told me it existed.  And that I needed it.  Lust began.  But dare I hope?  Well, I did.  Hints dropped, days passed.  Hints became less subtle to the point that even Father knew what his only son wanted.

Then Christmas came, as Christmas will.  Sister and I, still p.j. clad, rushed to the tree, and behold there was a package for me which approximated the size I imagined would contain

My Wood Burning Set.
And it did!

I played with that thing a bunch yet no memorable events occurred, neither untoward accident nor fantastic creation.  No physical mementos of my efforts survive.  If I created anything no one remembers it nor do I.

And eventually I did not use The Gift  anymore.

But what do we say about kids and their toys, and the boxes they came in? 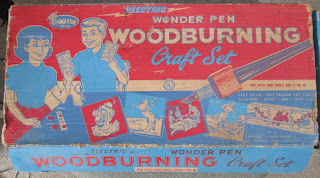 Word of the day: tonsillectomy

Happy birthday to my beloved daughter, Ivanelle, aka Ivy.
Posted by vanilla at 4:00 AM

I had a woodburning set a kid, too. Mom had a couple of my youthful creations hanging in her kitchen until she moved from the old family home last summer.

I remember that set. I was even allowed to touch it a few times.

My elder male sibling had one of those...I never bothered asking for any specific gift 'cause I knew I wasn't gonna get it. Disappoint averted.

I remember my wood burning set. That was fun, and I loved the smell of charred wood. I don't remember any of the projects that I did. Later, I used the handle with a new heating element and appropriate for a soldering iron as began to repair and rebuild old radios.

Jim, a pretty standard "toy" for two or three generations, I think.

Chuck, you graduated to a more useful craft. I never got there.

Oh, we had one too! I remember it wasn't really all that much fun.

It's amazing that we lived beyond such "toys." Remember chemistry sets? And then we had some rubber bug-making kit. you filled the hot metal tray with some sort of fluid, then baked the thing.

How come all of our toys were so dangerous? Were they trying to get rid of us??

Lin, get rid of us? No, no. Toughening process: what doesn't kill us makes us stronger. Yeah, I got in trouble with the chemistry. Remember the "rocket" story? Oh, and did you bake your own cakes in an oven "powered" by a light bulb? I don't remember making rubber bugs, but I dove Mom crazy with my capturing of bugs.

OK, you made me laugh out loud with the way you led up to "even Father knew "

Shark, yeah; dad's can be so thick-- when they want to be.