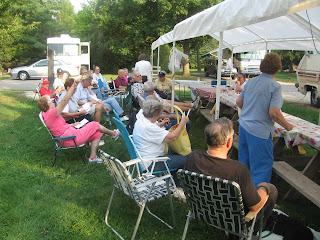 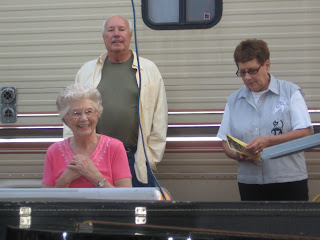 We just returned from our annual "Seniors Week" at Salamonie Reservoir. I have posted about this beautiful park several time in the past, a couple of these articles may be seen here and here. 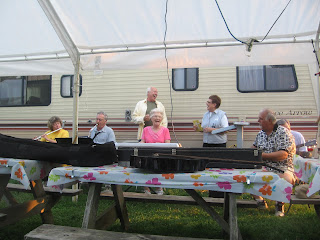 In addition to many other people, our club had thirty-eight representatives present.
Tuesday evening, the Scott Family Musicians led us in singing of gospel songs and hymns. What a great time we had!

On Wednesday afternoon, this group set up again and had a jam session, singing and playing many old western tunes, as well as some popular rock from the Carl Perkins era! Several people from various spots in the park wandered in to enjoy the music.

A little jammin' is bound to lift one's spirits!
Posted by vanilla at 4:00 AM

It appears that you had a lot of fun. I'm sure you hate to see the season of parks and camping coming to an end.

Vee, fun indeed. And, yes, October is the last campout for the year.