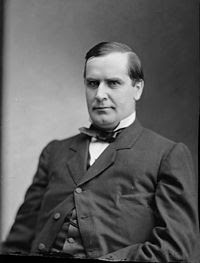 William McKinley, 25th President of the United States, was shot on September 6, 1901 in Buffalo New York. He died eight days later and was succeeded in office by Vice President Theodore Roosevelt.

McKinley had a distinguished career as a politician, having served as a US Congressman and as Governor of the State of Ohio. He had been elected to his second term as President the previous November.

Historians generally consider McKinley to have been a formidable political operative and a solid Chief Executive. He is ranked in the top twenty among presidents.

I have visited the McKinley Memorial in Canton, Ohio where he is entombed.

I have never learned much about McKinley other than the assassination.

Shark, nor did I relate much about him. He presided over the Spanish-American War, was noted as a high-tariff republican, and led the nation out of a depression into a prosperous time. Lots of info available, just depends upon how much one wants to know.

I read a few biographies of TR. He was vacationing in the Adirondacks (near to where I live) when he got the news. Because he was "roughing it," TR had to clamber down the mountain ranges to the valley below and traverse across rough roads in a few buggies. I guess he wore out a few horses on the way....

Rebecca, leave it to TR to be on an adventure!