St. John and the Locusts 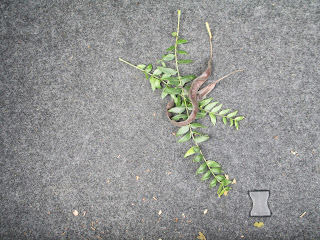 Louie, my brother in Christ, has been a friend for the past decade.  We enjoy discussing various facets of life.  We do not always agree, but we disagree in a most agreeable way.

A few evenings past, Louie and I touched on the ministry of John the Baptist in the wilderness.  In Matthew 3:4, we read of John, "his raiment of camel's hair, and a leathern girdle about his loins; and his meat was locusts and wild honey."

I remarked that though the provision may have been monotonous, it was no doubt plentiful.  "Imagine," I said, "eating grasshoppers and robbing bees of their honey.  Quite nutritious, nevertheless."

When he recovered his equanimity, Louie said, "No, no. He never ate grasshoppers.  I heard a preacher who had visited the Holy Land many times explain that the "locusts" were the pods from the locust tree which is plentiful in the area."

"No doubt there are such trees, but he ate grasshoppers."  (See how agreeably we disagree!)  Well, we left the conversation with neither of us convinced that the other was right.*

So a few days ago while walking the dog I observed a row of black locust trees.  I plucked some leaves and pods therefrom (see above picture).  I sent the picture along with the following to my friend:

This afternoon I was in the parking lot at Aldi with the dog whilst JoAnn was inside shopping.  As I was walking around, I spotted a row of black locust trees along the west side of the lot, so I walked over and plucked a couple of leaves and some pods.  Come on over; bring the wild honey.  We’ll have a feast!


A bit of study shows that the locust tree of America is native only to the western hemisphere, but it has been widely spread by transplanting throughout the world.  It is believed that it was named “locust” by early Jesuit missionaries who mistakenly thought it to be the tree that “fed” John in the wilderness.   In reality, the “locust tree” of the Bible is  the carob, also called St.John’s bread, and its pods are edible and commonly eaten by mammals of the region.  John may have eaten them with his honey.  And I still think he ate grasshoppers as well.


Ultimately, the point is God provided sustenance for John in the wilderness, and He provides for us as well!

*Louie holds his opinion still.  And I hold mine.
Posted by vanilla at 4:00 AM