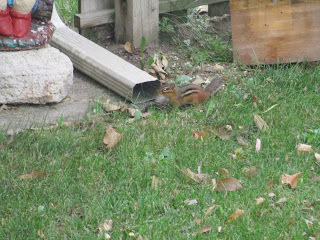 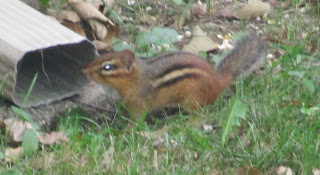 I was walking across the yard toward the barn when this little creature and I spotted each other.  He stopped just short of the downspout and posed for me.  It was as though he was saying, "Take a good look; you were wrong."  So I was, for I saw the animal zip into the downspout a few days ago and I thought it was a thirteen lined ground squirrel, for we have had them in the yard for some time.  Though sometimes referred to as a "ground squirrel," this one is an eastern chipmunk.
I snapped the picture, took one more step toward the barn door, and like a flash he was gone  up the drain.﻿
Posted by vanilla at 4:00 AM

I have never seen a chipmunk here in Florida, only up in Maryland; I think they are one of God's cutest animals.

He was most cooperative, and cute!

Cute! I did not know chipmunks were native to Indiana. Here the chipmunks are as close as the Garden of the Gods, but I've never seen one here in our complex.

He's a cute little guy. Reckon does he sing like Alvin?

John, thanks; they are cute little critters!

Vee, "cute" seems to be the adjective of choice today. I remember seeing chipmunks in Cheyenne Canyon. These are a different variety.

Chuck, haven't heard him sing, but I hope not.

I had to look up 13-lined ground squirrel - that is an interesting critter. I've never seen one or even heard of it.

All the chipmunks I've ever seen were way smaller than a squirrel...and they are speedy little devils...

I would consider myself very lucky to get a picture like that.

Grace, chipmunks are much smaller than squirrels, even the grey squirrel. Our largest squirrel in this area is the fox squirrel. The 13-lined ground squirrel is very small, perhaps even smaller than a chipmunk.

Anon, I did indeed feel very lucky to have the creature pose for me!

I love chipmunks, but we also don't have them in our yard. Those who do, curse them for some reason or another. I just like how they run with their tails held high in the air.

Lin, they are burrowing critters, so maybe your acquaintances fear their horses will step in a hole?

Lin, they are burrowing critters, so maybe your acquaintances fear their horses will step in a hole?

Sharkey, yes, they are cute.